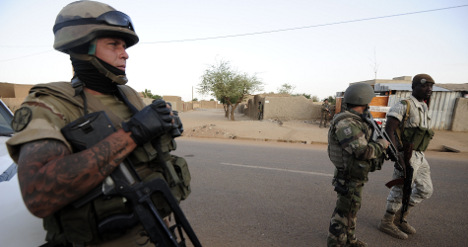 In the first large-scale urban guerrilla assault of the conflict, rebels from the Movement for Oneness and Jihad in West Africa (MUJAO) attacked Malian troops in the streets of central Gao, sending residents running for cover as Kalashnikov bullets and 14.5-millimetre rounds pierced the air.

Rocket-propelled grenade explosions and fire from heavy machine guns and light weapons resounded late into the afternoon before dying down in the evening, when a power cut plunged the city into darkness.

A French Tiger attack helicopter was circulating over the neighbourhood around the governor's offices and the central police station, the focal points of the attack.

French and Malian forces conducted joint patrols, warning residents that snipers could be hidden in the city. "Many Islamists were killed," said Colonel Mamadou Sanake of the Malian army.

A death toll could not immediately be established, and it was unclear whether any soldiers had been killed. Sanake said the rebels had infiltrated the city by motorcycle and via the Niger river, which passes near the governor's offices.

MUJAO, one of the Al-Qaeda-linked groups that seized control of northern Mali for 10 months in the wake of a military coup in March 2012, claimed the attack and a suicide bombing Saturday, its second in two days.

"Today God's faithful successfully attacked the Malian army, which let the enemies of Islam come to Gao," said spokesman Abou Walid Sahraoui. "The combat will continue until victory, thanks to God's protection. The mujahedeen are in the city of Gao and will remain there."

A witness said the gunmen had hidden in the empty police station – which MUJAO used as the headquarters of its "Islamic police" until French-led forces recaptured Gao on January 26 – then attacked Malian soldiers when they arrived.

When reinforcements came, snipers hidden in surrounding buildings opened fire on them, he said. The man said he had seen one body that appeared to be that of a civilian hit by a stray bullet.

A security source said there had been "several dozen" attackers. The French army said it had evacuated some 50 journalists who were in a nearby restaurant and hotel when the fighting erupted.

The latest violence underlined the threat of a drawn-out insurgency as France tries to map an exit strategy nearly one month into its intervention in its former colony. Late Saturday, a suicide bomber blew himself up at the same army checkpoint where the first such attack in Mali occurred a day earlier.

His severed head, still lying on the ground the next morning, was later picked up and placed in a wheelbarrow as French troops swept the site at the edge of Gao for landmines, finding three, according to a soldier.

The two MUJAO suicide attackers were the only fatalities in the explosions, although one soldier was lightly wounded in Friday's blast.

France is anxious to hand over its military operation to UN peacekeepers, and last week announced it would begin bringing its troops home in March.

Asked whether there was a risk getting bogged down long-term, Foreign Minister Laurent Fabius told journalists Sunday: "No. I've said that of course we have to be pragmatic but… the goals of the operation must be clear and the duration must not be infinite. "But we aren't going to just leave surreptitiously," he added.

Russian Foreign Minister Sergei Lavrov told France it was reaping in Mali what it had sown in Libya by arming rebels fighting slain dictator Moamer Kadhafi.

"In Mali, France is fighting against those it armed in Libya against Kadhafi's regime," he said. Lavrov has previously criticised French arms drops to rebels fighting Kadhafi's regime, denouncing France's interpretations of a UN resolution allowing the use of force to protect the civilian population.

Mali imploded after last year's coup waged by soldiers who blamed the government for the army's humiliation by a separatist rebellion among the Tuareg, a north African people who have long complained of being marginalized by Bamako. Many of the Tuareg rebels had fought alongside Kadhafi's forces in Libya.

With the capital in disarray after the coup, Al-Qaeda-linked fighters hijacked the Tuareg rebellion and took control of the north, imposing a brutal form of Islamic law.