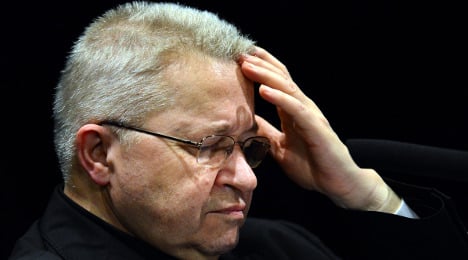 Andre Vingt-Trois ponders an answer during a conference in November. Photo: Gabriel Bouys/AFP

With Benedict announcing he is to step down at the end of the month because of old age the Vatican’s conclave of cardinals will soon have to make a decision on who is best suited to lead the church forward.

Without the usual period of mourning following a pope’s death a decision is expected to be taken fairly swiftly and bookmakers have already drawn up a list of favourites to become the next Pontiff.

Although there is much talk of the next Pope being from Africa or Latin America, one of the names that has also been mentioned – at least in France if not beyond – is that of Cardinal André Vingt-Trois, the Archbishop of Paris.

Thanks to his outspoken position on France’s divisive gay marriage row the Archbishop’s profile has increased in recent months and there are those who believe he has a good, if outside chance, of being the next Pontiff.

“He would be a good compromise choice,” Stephane Lemessin, a priest and columnist for France’s La Croix (The Cross) newspaper told The Local. “He would not be the first choice but nevertheless he could offer a solution if there is a divide over other candidates.

“The cardinal has reformed France’s Conference of Bishops and made it more relevant in the country and he is also used to dealing with difficult issues such as gay marriage and secularism,” Lemessin added.

Vingt-trois, who also served as Archbishop of Tours between 1999 and 2005 made his stance on gay marriage quite clear back in August when he revived a centuries-old tradition to launch a thinly veiled attack on France’s governing Socialist party.

In the 2012 edition he prayed for “newly elected officials” to put their “sense of common good over the pressure to meet special demands”.

His stance may have angered gay rights groups but some experts believe it may help his chances of leading the Catholic church from the Vatican.

“He did not join the protesters against marriage on the streets of Paris but he certainly handled the situation well and that will stand in his favour,” Lemessin said.

Education could be key

Vingt-Trois, whose surname translates as 'twenty three' attended the famous Lycée Henri IV, regarded as one of the most demanding and prestigious sixth form colleges in France. He then went on to earn a degree in moral theology at the Institut Catholique de Paris.

Religious historian Odon Vallet, from Paris’s Sorbonne University believes Vingt-Trois has “his chances” thanks in part, to his education.

“A good education will count a lot, believe you me. Vingt-Trois is one of the favourites along with the archbishops of Milan( Angelo Scola), Vienna (Christoph Schörnborn) and Budapest (Peter Erdo) as well as the Patriarch of Venice (Francesco Moraglia).”

Not all theologians are positive about the chance of the next Pope being French.

Gilles Routhier, from Laval University in Quebec told The Local: "I think many of them [France's eight cardinals] would be too old now. Cardinal Vingt-Trois is very well-known within France, but they're not particularly prominent figures within the church. I would be surprised if any French cardinal became pope next."

If  the next Pope is not from France then there is still a good chance he could be a French speaker with Quebec’s Cardinal Marc Ouellet, 68, considered a strong candidate to fill Pope Benedict’s boots.