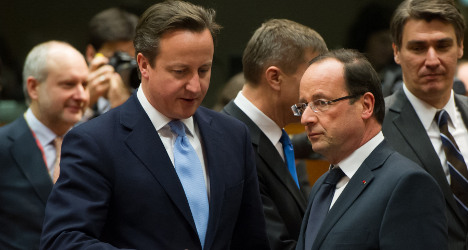 Although details of the deal are yet to emerge, it has been widely reported in the press that the 27 member states have agreed to cut the EU's budget for 2014 to 2020 by around 30 billion euros.

On Friday the negotiations edged towards a compromise, after a hard-fought two day summit which saw talks last through the night on Thursday.

It is believed the budget for the next seven year term will stand at around €960 billion, which represents around 1 percent of Europe's overall wealth.

The budget cut, yet to be officially confirmed, comes just days after French president François Hollande had warned against too much austerity at the expense of growth in his speech to the EU parliament.

Although sections of the British press claimed Friday’s expected deal to cut the EU budget was a defeat for Hollande, not all EU finance experts view it as such.

“I don’t think Hollande has been defeated here. I don’t think there was a big victory or defeat for anyone,” Tomasz Michalski from French business school HEC told The Local.

“There are no major changes and no major quarrels that were made public. Everyone is getting a bit too excited that it has been cut for the first time, but it was inevitable,” Michalski said.

In his speech to the European Parliament earlier in the week, Hollande had warned deputies about the dangers of cutting spending.

This week’s crucial summit comes after a bad-tempered November meeting failed when several member states, led by Britain, called for sharp budget cuts at a time when all governments were having to reduce spending, so as to balance the public finances.

EU President Herman Van Rompuy proposed in November a reduced budget of 973 billion euros ($1.33 billion) but failed to bridge the differences, with London seeking an even sharper reduction to 886 billion euros.

The main dispute concerns how spending cuts should be divided up between Cohesion Funds, which help newer members catch up with their peers, and the CAP, jealously defended by France.

The European Parliament plays a key role because it has to approve any budget accord.

Hollande also said that it was "legitimate to work on a new architecture for the European Union" but cautioned against member states picking and choosing what parts of the EU they wanted.

Thomas Klau from the European Council on Foreign Relations in Paris told The Local a cut to the budget would not be seen in France as a defeat to Hollande.

“It is too early to tell and we need to see the details of the deal, but he would only really come under serious pressure from the opposition and the press if a case could be made that he ignored France’s agricultural interests.

“He would also be criticised if he had nothing to show in terms of helping the growth agenda in Europe and targeting help towards poorer countries,” Klau added.

Klau himself believes a cut to the EU budget would be a mistake believing more money would be saved if spending was organized at an EU level rather than by each member state.

"There's an awful lot of projects, like diplomacy services or research and development that can be much more cost effective when done at EU level," Klau told the Local.