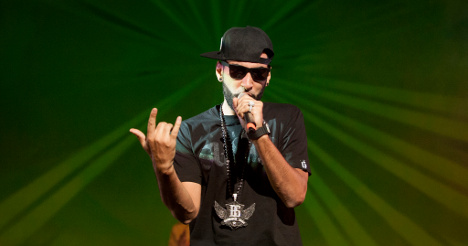 La Fouine (The Weasel) – real name Laouni Mouhid – is a 31-year-old double gold record-selling rapper from the suburbs of Paris. Like any good hip-hop star, he has more than one alias and also calls himself ‘Fouiny baby.’

He grew up in Trappes, in the western suburbs of Paris to a Moroccan family, “among junkies, with needles on the stairwells, and heroin on the stove.” He acquired his 'weasel' moniker from his appearance, and certain criminal characteristics in his youth.

Between the age of 16 and 21, he had four separate stays in prison for theft, burglary and drug-trafficking, before – in his own words – rap saved his life.

What’s he done since then?

What’s he been up to lately?

Getting shot at, to put it bluntly. At around 5am on Monday morning, Laouni was being dropped off at home by his driver when an unknown assailant fired in the direction of the car. La Fouine wasn’t hurt, and has declined to lodge a police complaint, but the attack has been big news in France this week, especially among hip-hop circles.

What’s that all about?

It’s hard to say for sure, but one thing we do know is that La Fouine has been involved in an increasingly nasty feud with another French rapper who goes by the name of Booba. Also from the suburbs of Paris, Booba is an older and more established artist in France, who has sold more than a million records in the country and collaborated with US superstars like Diddy and Akon.

On February 3rd, La Fouine escalated the tiff by uploading a song entitled ‘T’as le tremblote’ (‘You’ve got the shakes’) to YouTube, mocking Booba by name for his comparatively negligent sexual prowess, so to speak.

Booba responded just an hour later with a video of his own, called ‘Tue les tous’ (‘Kills all’), adding fuel to the fire by accusing La Fouine of sexual assault. In an interview with French daily Le Parisien, published on the day of the shooting, La Fouine discussed the animosity between them. “I take it pretty lightly, but I know that if it continues, it’ll end badly.” However there's evidence that has come to light to link the feud to shooting.

Paint me a picture of him.

La Fouine has a classically cocky rapper’s demeanour – full of macho hand gestures and head tilts – and dresses in sideways baseball hats, hoodies and baggy jeans. His rapping style is not particularly abrasive, and he mixes smooth RnB vocals to achieve an overall ‘down-to-earth Casanova’ persona. He’s got plenty of charisma, and a permanent smirk that makes him look something like the bearded, Moroccan cousin of American rapper and producer Pharrell Williams.

On his 2011 concept album ‘La Fouine vs. Laouni,’ he constructed a ‘Jekyll and Hyde’ split identity, between each of the two discs, and had this to say about it in an interview with Le Parisien at the time.

“La Fouine is a total idiot – stupid and vulgar. But me, Laouni, I’m calm. I respect women.”