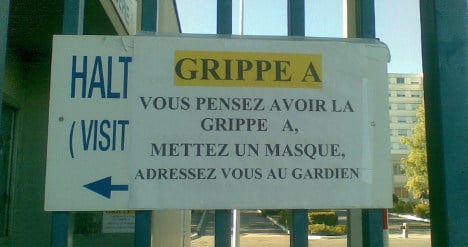 A sign at the entrance of a clinic in Neims, France in 2009 reads "If you think you have Type A flu, put on a mask and talk to the warden." Photo: Randalfino/Flickr

It took four days of suffering before Arnaud Bigerel finally succumbed to the flu on Sunday afternoon in his parents’ home in Val-et-Châtillon, near the northern French city of Metz.

His distraught parents are struggling to comprehend how a fit young man could fall victim to a common virus that comes and goes every winter. According to the family of the young postman, medical professionals repeatedly dismissed their concerns about the severity of the symptoms between the onset of his illness on January 30th and his death on February 3rd

“They did not take the flu seriously, but it kills," said Bigerel’s father, in an interview with RTL radio on Thursday.

Even after a sudden and brutal deterioration in his condition on Sunday, and despite making ‘three or four’ emergency calls that day, the young man’s desperate father was told “Don’t worry, it’s not serious, it’s just the flu,” according to a report on TF1 television.

By the time an ambulance finally arrived at the family home, Bigerel had lost consciousness, and his heart had stopped. He died of heart failure at around 4.30pm.

'Anyone at risk should seek medical help as soon as possible'

The death of a seemingly healthy young man from a common virus has made the headlines and increased concerns in France over the ongoing flu epidemic that has gripped the country.

France’s flu epidemic has been intense this winter. Since November 1st, 25 deaths have been recorded throughout the country and 236 cases have been serious enough to warrant treatment in an intensive care unit.

The virus continues to spread, with Paris and the Ile de France region one of the worst hit. The French Institute for Public Health Surveillance described the epidemic as "intense" and noted a steep rise in the number of people admitted to hospital, particularly young children.

"We've got a special situation this year because there have been outbreaks of three different strains of flu," Dr Anne Mosnier, national coordinator of the Regional Organization for the Observation of Flu (GROG), told The Local on Thursday.

Mosnier said that in deadly cases, the virus can take hold so quickly that it is impossible to treat.

"People in France tend to visit their doctor more than in other countries, so it can make it more difficult for medics to determine how serious a case is," Mosnier said.

"In general, though, anyone in an at-risk group – the elderly, young children, those with underlying conditions like pneumonia, or cardiac or respiratory problems – should always seek attention as soon as they experience flu symptoms," she said.

People not in the at-risk groups, however, should pay attention to any shift from standard flu symptoms – coughing, fatigue and a fever – to more serious ones, said the expert in epidemics.

"Chest pain and breathing difficulty, they're not normal symptoms for anyone, and if you experience them, you should see a doctor right away," said Mosnier.