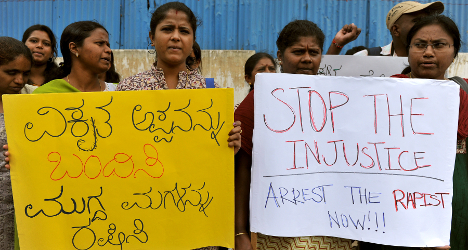 Indian activists call for the arrest of Pascal Mazurier in Bangalore on June 18, 2012. Photo: Manjunath Kiran/AFP

In a case threatening to overshadow President Francois Hollande's scheduled visit to India next week, lawyers acting for Suja Jones Mazurier have asked the ministry to investigate the conduct of senior officials at the the French Consulate in Bangalore.

The father, Pascal Mazurier, who worked at the consulate, was charged in June 2012 with the rape of his three-year-old daughter. He was released on bail in October but continues to face the rape charge and has been forced to surrender his passport.

Two days after he was imprisoned, Mazurier transferred 250,000 rupees (€3,472) to an account in the name of Vincent Caumontat, the deputy consul in the southern city regarded as the hub of India's burgeoning IT industry, according to bank records submitted to the French Foreign Ministry.

Lawyers for the mother have asked Foreign Minister Laurent Fabius to investigate why the money was apparently transferred to a consulate official and what it was used for.

The lawyers have also asked Fabius to explain why the father has received what they described as excessively active consular support while the interests of the daughter, now 4, and her brothers, 2 and 7, who are all French citizens, have allegedly been ignored.

Their complaint suggests that Dominique Causse, the Consul at the time of Mazurier's arrest, attempted to pervert the course of justice by suggesting to the Indian police that Mazurier was subject to diplomatic immunity, "whilst knowing perfectly well he was not at a level to be accorded a diplomatic passport."

Confusion over that issue led to Mazurier, who was arrested on June 14, not being formally charged until June 19, a day after France's ambassador in New Delhi clarified his status.

Lawyers for Suja Jones urged Fabius to appoint an official from the Delhi embassy to ensure that the interests of the children were being defended as actively as those of Mazurier.

There was no immediate reaction from the Foreign Ministry to the complaint filed by Suja Jones's lawyers on Tuesday afternoon.

Officials at Hollande's official residence, the Elysee Palace, were equally tight-lipped about an audience granted to Pascal Mazurier's lawyers on Monday.

The lawyers confirmed the meeting to AFP on Tuesday but Hollande aides refused point-blank to confirm or deny that it had taken place, in what was seen as a sign of the how sensitive the issue is.