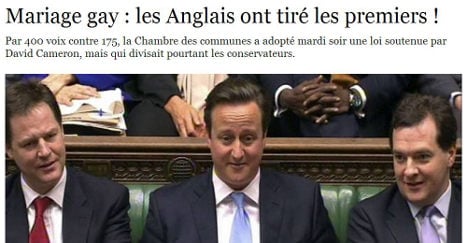 A historic bill to legalize gay marriage in France is slowly snaking its way through a two-week parliamentary debate with deputies having to pore over more than 5000 proposed amendments.

The marathon discussions, which have driven some bored French MPs to distraction, comes after weeks of mass public protest against the Socialist government's flagship proposals.

In contrast, over in London, British MPs passed their own historic bill by 400 votes to 175 after a two day debate and no mass protests.

A December Yougov poll highlighted similar levels of public support for gay marriage in the two countries, but getting the bill across the finishing line is proving much tougher on one side of the Channel than the other.

'The British voted after two days, we have a load of nonsense'

Socialist party deputy Jérôme Guedj – who was in the news elsewhere today after being caught playing Scrabble during the vote – appeared frustrated with the duration of the French debate.

“Today the British voted for ‘marriage for all’ after just two days. And here we are, ten or so days into this process, with a load of nonsense going on, all to mask the fact that the Right has nothing to really say about this issue,” he told France’s parliamentary TV channel LCP.

In response to such arguments, UMP deputy Claude Goasguen pleaded with his Socialist counterparts, “France is particular when it comes to gay marriage, so please stop pointing to developments in other countries.”

The French media have also not been slow to pick up on the discrepancy.

Most media outlets noted a clear distinction in both the tone of the public debates in both countries, as well as the relative ease with which the law has cleared the House of Commons.

Reporting the vote in Westminster, French daily Libération noted how it passed with little fuss.

"The story only made the front page of one newspaper, the Daily Telegraph, a sign that same-sex marriage has provoked little public debate," Libération's article read.

The contrast in the two parliamentary debates has provoked a fair amount of soul-searching in the country, with France's Huffington Post questioning the state of French society.

"Is Britain more open than France to be able to accept such a big change to society?"

Many media sites also pointed out the fact that the strongest opposition to the law came from within Prime Minister David Cameron’s own ruling Conservative party, whereas in France  the governing Socialist party are united behind the bill.

“As the French debate becomes even more relentless, the British take the plunge,” said France TV.

“In contrast to France, the debate has not led to popular protests” and has taken place in a “less hostile” climate, said weekly magazine L’Express on Tuesday.

Leftist daily l’Humanité described the political and popular landscape in the UK as one of “general consensus”.

L’Express also noted the “fierce opposition from a significant fringe of the Conservative party.”