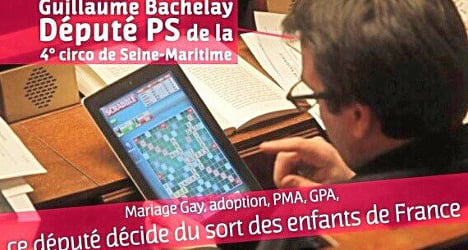 Do you get bored at work? Have you ever resorted to Farmville, Words with Friends or Angry Birds, to turn the hours into minutes? Well, you may have some kindred spirits at the highest level of French politics.

Despite the first and most important article of the government’s bill being overwhelmingly passed on Saturday, the deputies still have the task of trawling through thousands of proposed amendments to the historic legislation.

Concentration levels appear to be waning. Needing “to find something to occupy his mind” as the debate rumbled on into the wee hours of Monday morning, Socialist deputy Thomas Thévonoud turned to his iPad for a game of Scrabble.

The 39-year-old politician was unapologetic about the game, telling Europe 1: “I had to keep myself busy during the obsessions and obstruction of the Right.”

“My friend Jérôme played ‘branleur’ [‘slacker’] for eight letters, but I came back with ‘layette’ [‘baby clothes’].  I was just about to score 102 points [for a word], when the internet connection crashed. Considering it was almost three o’ clock in the morning, this proves that the old grey matter is still working,” said Thévonoud.

Later on the morning in question, deputy Marc Le Fur – from the main opposition UMP party – caused a stir by tweeting an anti-gay marriage poster that featured an image of his Socialist counterpart in the middle of his Scrabble game.

The poster tweeted by Le Fur contains the message: “Gay marriage, adoption, assisted reproductive technology, surrogacy. This deputy is deciding the fate of France’s children. How about you?” The poster ends with a link to the website of a campaign for a referendum on gay marriage.