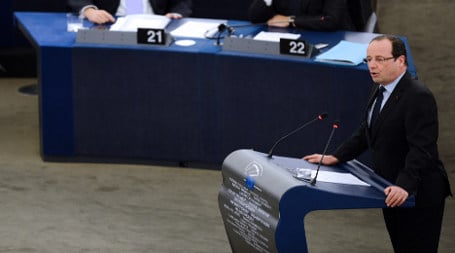 Referring to Cameron's recent pledge to hold a future in/out referendum on the European Union, Hollande told deputies at the parliament in Strasbourg that Europe had to be for the good of all member states.

"It cannot be just a group of nations picking and choosing what would be useful for them and them alone. I argue for a differentiated Europe not a two-speed Europe, or Europe à la carte". he said.

Hollande's words echoed those of the French government in the aftermath of Cameron's much-publicized referendum promise last month.

Foreign Minister Laurent Fabius had warned the UK that when it comes to Europe, it's all or nothing.

"Imagine the EU as a football club. When you join it, you are in. You cannot just decide to go and play rugby," Fabius said.

During his 30-minute speech on Tuesday, the French president also warned against making drastic cuts to the EU's trillion-euro budget for 2014-20, at the expense of growth.

A bad-tempered November summit failed when several member states, led by Britain, called for sharp budget cuts at a time when all governments were having to reduce spending so as to balance the public finances.

Hollande had warned at the weekend that "the negotiations are very difficult … the conditions are, at this moment, not yet in place" for an accord at the summit in Brussels on Thursday and Friday.

During his  speech the president also laid out his vision for the future of Europe.

"Europe can not just be a financial market, a budget, or money," said the president. "Europe is not only a collection of treaties or a set of rules, as necessary as they might be. "

Hollande insisted that France was committed to the European project, an economic and social model "envied on all other continents," but the debt crisis meant that many people were losing faith, putting national interests first.

"The eurozone crisis is to a great extent behind us but the challenge today … is the mistrust of our people," he said.

Against this backdrop, EU could not simply adopt tough austerity policies – "France will not accept that," he said – and so had to ensure that core spending remained in place to promote vitally needed growth.