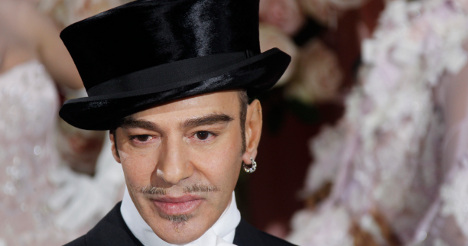 Chantal Giraud-van Gaver, confirming a report by industry journal Women's Wear Daily, claimed a first round victory in the case after a tribunal ruling on Monday.

The Conseil de prud'hommes (labour relations tribunal) in Paris on Monday ruled that it was competent to hear the case, dismissing arguments by lawyers for Christian Dior Couture that it should go before a commercial tribunal because he was more of an independent subcontractor than a subordinate or employee.

"Dior failed in its strategy of contesting the existence of a work contract in the face of all the evidence," Giraud-van Gaver told AFP.

Dior has 15 days to lodge an objection. If it does so the case will be referred to the Paris appeal court. If not, a hearing to examine Galliano's compensation claims before the labour relations tribunal would likely be held by the end of the year, she said.

Giraud-van Gaver declined to specify the exact amount of his compensation claim. But she added: "He earned a lot of money. What he is seeking is proportionate to that so it is by virtue of that a lot of money."

Galliano, who is considered a fashion genius, was dismissed in March 2011 after video emerged of him hurling anti-Semitic insults at patrons of a Paris bar.

He was convicted last year in France of making "public insults based on origin, religious affiliation, race or ethnicity". Galliano blamed the outburst on drink and drug problems and went into rehab for two months.

The hearing on Monday heard that at the time of his sacking, Galliano earned a fixed gross annual salary of one million euros ($1.3 million) from Christian Dior Couture plus substantial perks, according to Women's Wear Daily.

In addition, he earned two million euros ($2.7 million) as artistic director of his own brand John Galliano, which was 91-percent owned by Christian Dior Couture, it said.

In addition to his conviction for anti-Semitism, Galliano was also stripped of the Legion d'Honneur last August. He was awarded the top French medal in 2009 for services to haute couture.