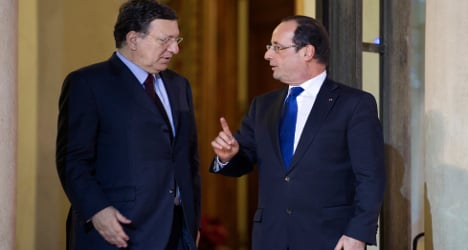 "The negotiations are very difficult. … We are doing all we can so that we can reach an accord … but the conditions are, at this moment, not yet in place," he told reporters.

He made the comment as EU leaders prepare to meet in Brussels on Thursday and Friday for a second attempt at finding a deal on the 27-nation bloc's trillion-euro budget for 2014-20.

Hollande's warning came a day after German Chancellor Angela Merkel said the budget negotiations would be "very difficult" and that it may take time to reach a deal.

But European leaders were unable to resolve differences about demands for cuts in the budget by some member states and over how spending cuts should be split across different European policies.