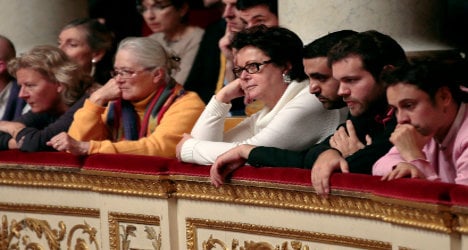 Members of the public watch on from the gallery as deputies go through the 5362 suggested amendments. Photo: Jacques Demarthon/AFP

The Socialist government’s proposed law to legalise gay-marrriage and open up adoption to same-sex couples entered parliament last Tuesday, but with 5362 suggested amendments to discuss it was always in risk of getting a little bogged down.

This weekend deputies debated for a total of 30 hours, finally heading home to bed on Monday as most Parisians were going off to work.

The bad news for the deputies is that although they have made progress, there are still another 3712 amendments to get through.

Opposition UMP deputies had tried to bring the discussions to a close at the more reasonable hour of 1.30am on Sunday but were voted down. According to France's TF1 website UMP deputy Christian Jacob did manage to persuade fellow lawmakers to take a break at 7am, so he "could nip out and get a pain-au-chocolate".

Despite the lengthy deliberations there was a key moment on Saturday when deputies voted 249-97 in favour of article one of the draft legislation which redefines marriage as being an agreement between two people rather than necessarily between a man and a woman.

"We are happy and proud to have taken this first step," Justice Minister Christiane Taubira said. "We are going to establish the freedom for everyone to choose his or her partner for a future together."

The long hours appear to be getting to some of the deputies with tempers flaring at regular intervals throughout the debate. Socialist deputy Yann Galut and UMP rival Philippe Gosselin reportedly almost came to blows at one point at the weekend. A photo was published in the press of the pair remonstrating with each other at close quarters.

Despite the government having a healthy majority and a determination to push the bill thorough anti-gay marriage protesters continued to make their voices heard at the weekend.

According to police around 80,000 took part in demonstrations across the country at the weekend.

Opinion polls suggest a clear majority of French voters support the right of gay couples to wed and a narrower majority favour them being granted the right to adopt as couples (gay men and women can already adopt as individuals if approved by social services).