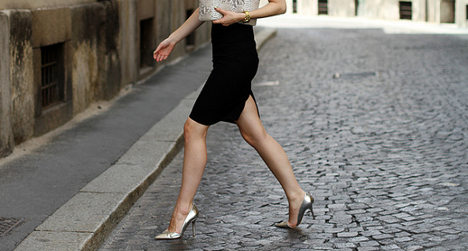 From now on women in Paris will no longer flout the law if they wear a pair of trousers. Photo:Leather fashion fashionista

Najat Vallaud-Belkacem, France's minister of women's rights, said in a statement that the ban, imposed on November 17, 1800, was incompatible with modern French values and laws.

The municipal order required Parisian women to seek permission from local police if they wanted to "dress like a man" by wearing trousers.

It was modified in 1892 and 1909 to allow women to wear trousers if they were "holding a bicycle handlebar or the reins of a horse" but had officially remained on the books.

Answering a question in the Official Journal of the French Senate,Vallaud-Belkacem said that while it had not been formally struck down, the order was in effect abrogated.

"This order was aimed first of all at limiting the access of women to certain offices or occupations by preventing them from dressing in the manner of men," she said.

"This order is incompatible with the principles of equality between women and men…. From that incompatibility stems the implicit abrogation of the order," she said.

Parisian women had demanded the right to wear trousers during the French Revolution, when working-class revolutionaries were known as "sans-culottes" for wearing trousers instead of the silk-knee breeches (culottes) favoured by the bourgeoisie.

She was later subjected to jeers and wolf-whistles while wearing a floral summer dress in the National Assembly.

A number of women also broke parliamentary protocol by wearing jeans during an extended debate at the weekend over France's planned legalisation of gay marriage.