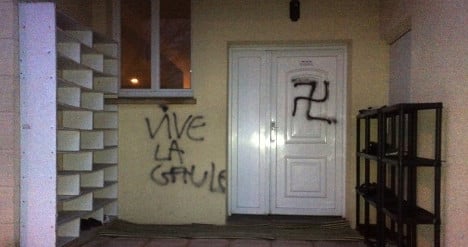 Graffiti mars the facade of a mosque in Ozoir-La-Ferriere in a picture taken on February 3rd. Photo: ACMO/AFP

The attack was discovered by worshippers arriving for morning prayer at the mosque in Ozoir-La-Ferriere, a small town 35 kilometres (20 miles) east of Paris.

Photographs of the mosque show at least two swastikas painted on the facade, as well as an explicit anti-Islam slogan and "Long Live Gaul," the ancient Roman-era name for France.

Police were investigating the incident.

In the eastern city of Besancon, two mosques were also vandalised, where the Star of David – commonly used by the Nazis to identify Jews – had been painted on the walls.

Sources close to the enquiry however cautioned the vandalism was not necessarily triggered by anti-Islam sentiment, and said investigators were looking at several leads including whether it was carried out by an unhappy worshipper.

Interior Minister Manuel Valls condemned the attacks "with the utmost severity" and called them "foul and hateful."

According to statistics from an Islamic monitoring organisation, 201 anti-Islam attacks were recorded in France last year, up 28 percent on 2011.

In October last year a French far right youth group caused outrage in the Muslim community by storming a mosque in the town of Poitier, south-west France before occupying the roof and unfurling anti-Islam banners.

Marwan Muhammad, spokesman for the Collectif Contre l'Islamophobie en France (CCIF) told the Local it was time the government took stern action against those behind the attacks.

"They have to be firm when they arrest these people. They need to be punished severely. Only four were arrested among those who stormed the mosque in Poitiers and they have been released.

"It is almost like they are given an incentive to carry on with these acts. The government has vowed to crack down on anti-Semitism in France but they need to do the same with Islamophobia. People are scared."

As well as the weekend graffiti attacks the CCIF have also reported that pork meat was sent to a mosque in northern France, marking another Islamophobic act.