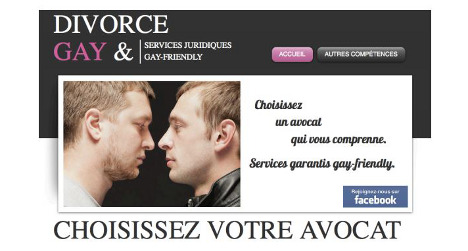 A screengrab from Divorce-Gay tells users to "choose your lawyer"

Just a day after the National Assembly began its marathon two-week debate on the bill to legalize gay marriage, two internet entrepreneurs began preparing for the next 'difficult' step – gay divorce.

A good six months before the law is expected to come into force, Simon Faucher and Stéphane Cola launched their site www.divorce-gay.fr.

The website features an inventory of French lawyers chosen for their particular ability to cater to gay men and lesbians seeking advice about divorce. In a statement, the creators of the new gay-friendly directory explained the rationale behind the move.

"As gays and lesbians gain new rights and freedoms, this also creates new complications and difficulties – legal, financial, and to do with inheritance – that up to now only heterosexuals experienced."

As a result, 'Divorce-Gay' guarantees users a respectful welcome from the listed lawyers, who “can answer your questions without hassle or prejudice.”

As well as divorce, the site also offers legal help on issues like adoption, assisted reproductive technology, and discrimination.