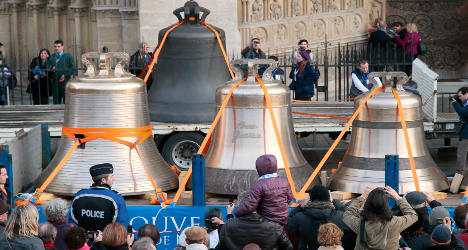 The bells, named Dame de Paris (lady of Paris) Maurice, Gabriel, Anne-Geneviève, Benôit-Joseph, Jean Marie, Etienne, Marcel, Marie and finally Dennis, were given a warm welcome as they were delivered to the iconic cathedral in the heart of Paris.

Hundreds lined the streets to watch them be carried on two trucks to the famous landmark, where they were greeted by gathered crowds to the sounds of its old bells ringing.

Four of the old bells, in place since 1856, had deteriorated because of the low-quality metals used, rendering them out of key with the main tenor bell, Emmanuel, considered one of the finest examples in Europe.

The nine new bells will be installed overnight Friday and on display for a month from Saturday, before they will be rung for the first time on March 23 to mark the beginning of the Holy Week before Easter.

Eight of the bells were made in a foundry in Normandy, but the largest Marie, which weighs in at a cool 6.2 tonnes, was made in Asten in the southeastern Netherlands.

The new bells took a year-and-a-half to build and are expected to last 200 to 300 years. The project to build and install them cost 2 million euros ($2.7 million) and was financed by private donations.

The Gothic cathedral on an islet on the River Seine is one of the most visited sites in Paris, attracting 13.6 million visitors in 2011.