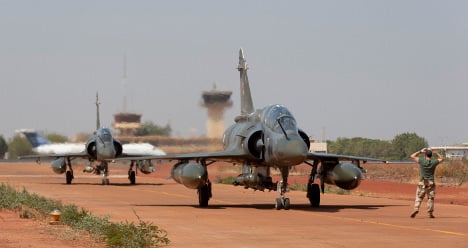 Ground troops gathered at the gates of Kidal, a desert outpost that is the last rebel stronghold yet to be fully recaptured, as France said its fighter jets had blasted command centres, training camps and depots run by Islamist extremists in the mountains north of the town.

Many rebels are believed to have slipped into the desert hills around Kidal since France launched air strikes on January 11 in a surprise assault to block an advance towards the capital, Bamako, by Al Qaeda-linked extremists who have occupied the north for 10 months.

The latest air strikes were carried out over the past few days in the Aguelhok region near the border with Algeria, a French military spokesman told journalists.

To back up the ground troops already in place, a column of 1,400 Chadian soldiers was heading by road towards Kidal from the Niger border, he added.

But, in a sign the insurgents remain a threat, at least two Malian soldiers were killed when their vehicle drove over a landmine in central territory recaptured last week from the rebels, a security source said.

Paris has urged dialogue between "non-armed terrorist groups" and Mali's interim government for a long-term solution to the woes of the country, which straddles the Sahara desert and the region to the south known as the Sahel.

Tuareg desert nomads in the north have long felt marginalized by Bamako, and last January rebels launched the latest in a string of insurgencies, kickstarting Mali's rapid implosion.

Meanwhile, UN officials said planning was at an advanced stage to gather those forces together under the umbrella of a formal UN peacekeeping operation.

France now has 3,500 troops on the ground and with support from the Mali army, has retaken several rebel strongholds, including the large regional town of Gao and the fabled desert trading post of Timbuktu, with no resistance.