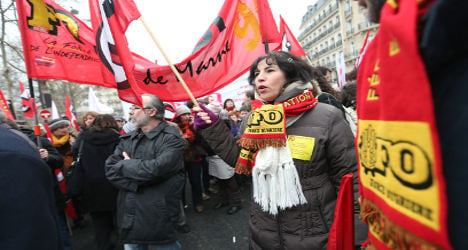 Thursday's strike comes a week after teachers (above) walked-out in protest over an extension to the school week. Photo Thomas Samson/AFP

Up to 5.2 million civil servants, from the CGT, FSU and Solidaires unions staged a walk-out in protest over working conditions, stagnant salaries and loss of spending power.

As many as 120 demonstrations are to be held nationwide including one in Paris, which will start at Port Royal on the Left Bank at 2pm.

Many civil servants are disappointed the government has not done more for them since it was elected last year.

“We have not seen any concrete sign that makes us think things are going to change,” Denis Turbet-Delof from Solidaires said in Le Figaro. “everyone wants change. We have waited a long time.”

Teaching union SNUipp-FSU has said almost one in three teachers will not be turning up in school today to join the protest. Thursday’s strike comes just a week after schools across Paris were closed as teachers protested over the proposed extension to the school week.

The walk-out, which will affect hospitals as well as state institutions is a concern for President François Hollande and his Socialist government, for whom public servants represent the backbone of their electorate.

According to French daily Le Figaro two out of three civil servants, known as fonctionnaires in France, voted for Hollande in the second round of last year’s presidential election.

Protestors are calling for the salary index, which is used as the basis to calculate their salaries, to be re-evaluated. The index has been frozen since 2010.

Unions want to send a message to the minister of Public Service Marylise Lebranchu before she holds a key meeting on February 7th to discuss the matter of civil servants salaries.

The minister recognised this week “the difficult situation facing civil servants” but also spoke of “budgetary constraints” on the government.

She has tried to appease the unions by suggesting a “new system of bonuses” will be introduced.