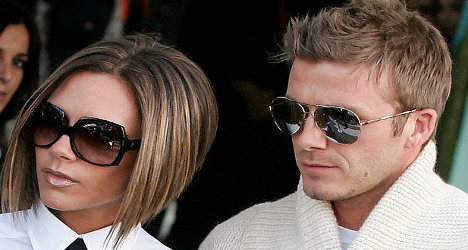 David Beckham (right) and his wife Victoria (left). The footballer is set to sign for PSG on Thursday, according to media reports. File photo: friskytuna/flickr

Former England captain David Beckham has signed a five-month deal to join big-spending French club PSG, the French club announced on Thursday. The 37-year-old former Manchester United and LA Galaxy player passed a medical at the Pitie-Salptriere Hospital in Paris and was officially unveiled at a press conference at the Parc des Princes at 5pm Paris time.

The deal will keep Beckham at the club until June.

In an extraordinary development, Beckham revealed during an official PSG press conference on Thursday evening that he would be donating his entire five months' salary to a children's charity in France. "It's not something that's ever been done before," said Beckham, "but it's a decision we arrived at together, and it's something I'm very excited about."

The footballer has long been linked with the Qatari owned French club and was on the verge of a move this time last year before he pulled the plug, deciding instead to remain in the US with his club LA Galaxy.

The club's president Nasser Al-Khelaifi and the club's director of football Leonardo have coveted the Englishman for a while, and this time they finally got their man. Up to 12 clubs were linked with Beckham since he left LA Galaxy in December and at one point it looked second division French club Monaco were favourites to land the player, known as 'Spice Boy in France.

"I got more offers from more clubs than I ever have before," said the former England captain.

According to reports in the French press, his wife Victoria and their four children are expected to remain in London rather than move to Paris, though at this evening's press conference Beckham suggested he himself would stay at a hotel in Paris, rather than find an apartment. "I won't be telling any of you where it is, either," he joked.

League leaders PSG have already shelled out millions putting together a squad that includes Sweden international Zlatan Ibrahimovic and Brazilian wonderkid Lucas Moura plus compatriot Thiago Silva. Beckham will join their ranks, but whether he can nail down a place in the first team remains to be seen.

No doubt his status as a global superstar will be welcomed by the club's marketing department.

Beckham's arrival, which comes as a surprise on the last day of the transfer window, has sent the French sporting press into a bit of a frenzy.

"Beckham signs for PSG!" was the headline on sports daily L'Equipe's website as the unexpected news broke.

The star's switch to the city of light has been welcomed by some supporters of the Paris club.

"Beckham will bring his winning mentality and professionalism to the team," PSG fan Nicolas Lartigue told The Local. "He won't play every game but his crosses and free kicks will be a real bonus.

"Ok he's a bit of a grandpa in the world of football but he will be brilliant for the PSG brand, especially in Asia".

Beckham was cheerful when asked about his age on Thursday evening: "It feels very good to be in Paris, at a club like this, and to be the 'Elder Statesman' of the league. I still feel great, most days. I still feel 21 years old."