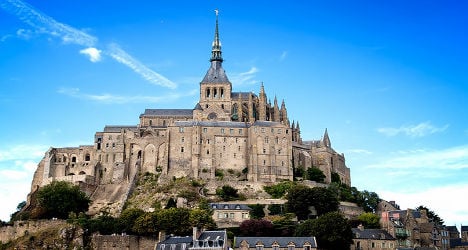 Prosecutors at his trial on Wednesday called for Eric Vannier to be handed a six-month suspended sentence and 30,000-euro ($41,000) fine on conflict of interest charges.

Vannier, 60, is alleged to have changed the route of shuttle buses to the famed rocky island and its Gothic-style Benedictine abbey so they would depart from an area where his Mere Poulard hotel and restaurant company are located

The move, which took effect in April, forced tourists to walk 900 metres (984 yards) from the main parking lot to the departure point for the island, an UNESCO World Heritage Site.

"The departure point is right in the middle of two businesses run by Mr. Vannier," local prosecutor Renaud Gaudeul told the court, adding that the move "had a direct impact on his businesses."

Vannier denied any conflict of interest, telling the court: "I truly defended the public interest, as always."

"All the accusations against my client, who has fought for 30 years in the interest of the public and the rejuvenation of the Mont, is false," his lawyer Richard Valeanu insisted.

The case is the result of a complaint filed by a political and business rival of Vannier, former Mont-Saint-Michel mayor Patrick Gaulois, who insisted it has nothing to do with "jealousy" and everything to do with his love of the Mont St Michel.

It is not just Mr Gaulois businesses who may have suffered as a result of the new shuttle bus service and parking system which was implemented to try and restore the authentic maritime environment of the Mont. It seems tourists too do not like the system with visitor numbers taking a tumble since it was introduced last April.

Tourists have complained about having to walk nearly one kilometre to catch a bus and as a result authorities have agreed to change the pick up point.

A ruling is expected on February 27.