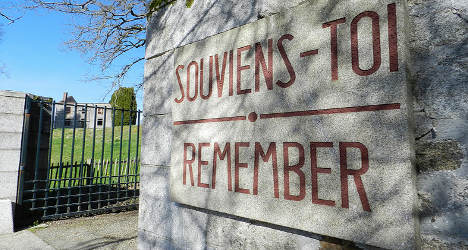 A plaque at the entrance to the destroyed French village of Oradour-sur-Glane asks visitors never to forget the massacre that took place there. Photo: Alejandro Mallea

Only six people survived in the June 10, 1944 massacre, in which 642 people – mainly women and children – were killed.

A statement from the state prosecutor's office in Limoges, in western-central France, said that under the label of war crimes "German judicial authorities, acting to assist in international legal proceedings, visited the scene this morning." They were accompanied by German prosecutor Andreas Brendel, it added.

Four days after the Normandy landings that marked the start of the liberation of France and Europe from Nazi occupation, Oradour was destroyed by a detachment of SS troops for reasons that have never been made clear.

Although several probes have previously been opened into the massacre, they have all been shut down due to a lack of evidence.

But when a historian in 2010 discovered documents implicating six suspects, still alive and now aged between 85 and 86, the case was reopened.

The documents were found in files kept by the Stasi, former East Germany's feared and hated secret police.

The suspects, aged 18 and 19 at the time, allegedly ordered the town's inhabitants, including 247 children, to assemble in the village square.

Women and children were then herded into the church which was pumped full of toxic gas and set on fire. The men were machine-gunned and burned alive in a barn. The entire village was then torched, never to be rebuilt.

In France, the slaughter, which left only six survivors, has come to symbolise the worst of Nazi barbarity and the village has been left as it was as a memorial.

Brendel told AFP that investigators on Tuesday tried to find "supplementary evidence" on site, "to see where the different units were deployed in Oradour" and to hear new witnesses.

Some 60 soldiers were brought to trial in France over the massacre in the 1950s, and 20 of them convicted, but all were released within a few years.

Brendel suggested he hopes a new legal process will be opened in Germany before the end of this year.