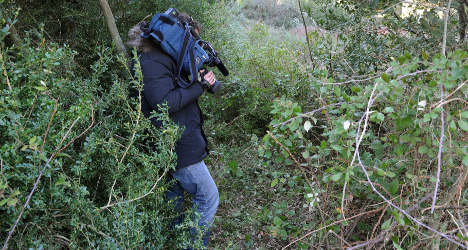 A camerman films at the scene where the body of the mother of three was found. Photo Pascal Guyot/AFP

Robert Plant, 32, was formally charged at a court hearing in the southern French city of Nimes, two days after being arrested. He was retained in custody.

Ruling out any grant of bail, the magistrate said the prosecution's case would be that the murder had been the result of an attempted sexual assault
that went wrong.

Plant lived with his mother Esther 300 metres (yards) from where the woman's partly clothed body was found on January 24.

The suspect's family were originally from Chatham in Kent.

Her body was found on Thursday evening after her children's school alerted her partner that she had failed to pick them up.