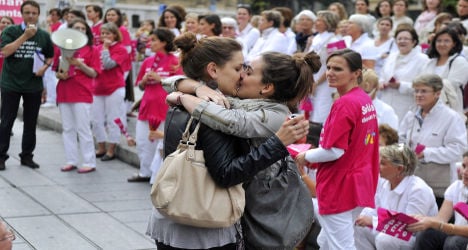 The deputies, many of whom have taken part in the recent pro and anti-gay marriage protests, will begin discussing the proposed “marriage for all” law in a debate that is expected to last for at least 12 days, weekends and evenings included.

Activists opposing the bill marked the start of the debate by hanging banners from bridges around Paris daubed with slogans such as "One mother, one father, it's elementary" and "everyone born to a man and a woman".

Justice Minister Christiane Taubira, a vocal supporter of the bill in recent weeks, is expected to kick-off the debate later in the day.

With the Socialists having a clear majority in the Assembly Nationale the bill is expected to pass, but no one in the government is taking their chances.

The leader of the Socialist group in parliament Bruno Le Roux sent an email to his fellow deputies on the left warning them of the need to “mobilise”.

Deputies from outside Paris, who would normally return home to the regions at the weekend, are expected to stay in the French capital for the duration of the debate.

Click here to read 10 of the most provocative statements made in the gay marriage row.

Despite the majority the left are expecting a tough ride from the right in what could be one of the most fiercely disputed bills in recent times.

Opposition MP’s have tabled a total of 5,362 amendments to the bill as well as 3 motions, one of which is expected to call for a nationwide referendum on the issue.

In French daily Le Parisien this week, the pro-gay marriage Minister for Families Dominique Bertinotti called for the right to “behave with dignity and not resort to insults”.

But leader of the right-wing UMP parliamentary group Christian Jacob hit back saying, “The provocations will all come from the left.”

The bill consists of 14 articles, one of which is allowing gay-marriage. Adoption for same-sex couples, and artificial insemination will also be debated.

Activists are expected to continue to make their presence felt outside parliament over the coming days with the hard-line catholic organisation Civitas having called followers to join for “prayer” outside the National Assembly on Tuesday.

Recent weeks have seen hundreds of thousands of people taking to the streets to voice either opposition to or support for a reform that has been championed by Socialist President Francois Hollande.

With opinion polls having consistently shown that a comfortable majority of the French supported allowing same sex couples to marry, Hollande could never have anticipated that a promise he made in his election manifesto last year would generate such controversy.

Instead, a campaign orchestrated by the Catholic church and belatedly backed by the mainstream centre-right opposition steadily gathered momentum throughout the autumn and culminated in a giant protest in Paris two weeks ago.

Somewhere between 340,000 and 800,000 demonstrators flooded into the capital in a protest that was at least twice the size of a pro-gay marriage march staged on Sunday.

“We need to show that the majority of this country is in favour of this project. We need to give the government the courage to follow this through. They can’t back track now,” he said.

The movement in support of gay marriage has been less strident but did produce one of the most iconic images of recent times, AFP photographer Gerard Julien's snap of a lesbian couple kissing in front of opponents of the planned legislation.

Throughout all the turmoil, Hollande's support for the legislation has not wavered and his girlfriend, Valerie Trierweiller, has revealed that the president will be attending the marriages of gay friends once the legislation is on the statute books.

That is expected to happen by the middle of this year with the Socialists enjoying an outright majority in parliament and the proposed reform also supported by the Greens, Communists and some centrists.