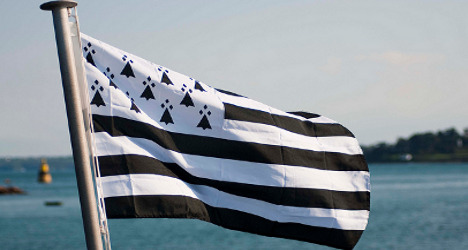 The magazine Bretons pulped 6,000 copies which had the story on the front page in a move that Breton nationalists suspect was the result of pressure from Ouest-France, the regional daily newspaper and a shareholder in the monthly.

Although the poll suggested only 18 percent of residents would support breaking away from France, it nevertheless represented a morale boost for nationalists who secured under five percent support at the last regional elections.

Didier Le Corre, the editor of the monthly, said the pulped copies had been destroyed for "technical reasons" and that he had taken the opportunity to change his front page from "18 percent of Bretons back independence" to "Bretons don't know their own history".

"The first headline might have put off some readers," Le Corre told AFP, denying he had been pressured into the change.

Yves Pelle, the chairman of the nationalist Breton Party, described the incident as "worrying" while admitting he had been "favourably surprised" by the poll result.

Pelle and other nationalists are hopeful an independence referendum due in Scotland in 2014 and the growing possibility of some kind of self-determination vote in Catalonia will boost their cause.

Long isolated from the rest of the rest of the country and with a proud maritime tradition, France's northwestern region of Brittany has strong ties to other parts of Europe's Celtic fringe.

Although political nationalism is weak, efforts to assert a distinct Breton cultural identity enjoy broader support in the region.

Breton, a Celtic language that is close to Cornish and Welsh, has enjoyed a mini-revival in recent years after decades of decline.

The poll carried out for Bretons magazine found that 37 percent of residents or the region would describe themselves as Breton first, compared with 48 percent who would say they are French first.