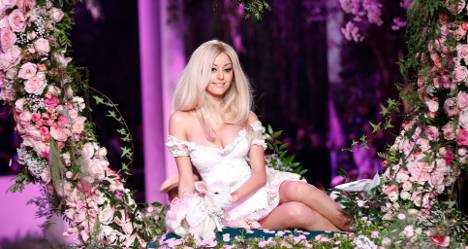 She’s the 20-year-old former call girl who has reinvented herself as a stylist and lingerie designer. She just goes by ‘Zahia’, and despite her efforts, is still best known as the then 17-year-old girl who claimed she was paid to fly from Paris to Munich to have sex with French football star Franck Ribery, as a special 26th 'birthday present' for him.

Well, we don’t have all the gory details, but we do know this: in 2010 it was revealed that an investigation had been launched into nine men accused of soliciting sex from a minor.  Three of them happened to be highly-paid French football stars; Franck Ribéry, Karim Benzema and Sidney Govou. All three have denied knowing her age at the time, and Zahia has said she never told them. In France, paying for sex and being paid for it are not illegal, but only if both parties are over the age of 18.

What’s she been up to lately?

With the backing of fashion godfather Karl Lagerfeld, the Algerian-born Zahia launched her own lingerie brand ‘Zahia’ last year, but her public renaissance really came this week when French TV channel Paris Premiere broadcast a much-hyped documentary, called  'Zahia: From Z to A'.

What did we learn about her?

Well we learned that it takes her more than three hours each morning to get dolled up, as one review in the French press noted. Other than that the documentary gave us an insight into Zahia's day-to-day life. There was laughter, tears, flashing cameras, and a whole lot of running between taxis.

There were also some revealing personal moments, when Zahia spoke about the call-girl affair. She accepted that she had "done certain things, in order to be in a position to do other things later on." It was only a "small part of her life," though, and she lamented that the whole episode had been "horrible" for herself and her family. We also learned she has an obsession with female film stars from 1960's Egyptian films.

Someone like her must constantly be on TV. What's so special about this documentary?

Well actually, she very rarely gives interviews, and when she does, she’s always shy and retiring – covering giggles with her hands, muttering one-word answers, looking nervously at her publicist, and so on. But when it comes to publicity of the visual kind –photo shoots with V magazine and Vanity Fair, for example – that’s a different story.

One thing you really have to know about Zahia is that, up to now, she’s let her body and her image do the talking for her, and ‘shy’ is not a word I’d use to describe that side of her personality.

Zahia wears trademark peroxide blonde extensions, and has a kind of manga-Barbie doll aesthetic – all cat-eyes, heavy make-up and almost CGI-enhanced curves. For someone trying to outrun the shadow of her ‘underage call-girl’ tag, her persona in photo-shoots is uncomfortably coquettish. She often poses in fluffy white lingerie, and has been snapped with pink-bowed lambs and miniature puppies.

“I’m not a prostitute. I’m not part of any network, I don’t have a pimp, and I don’t give my money to anyone. I do whatever I like. I have sex – paid or unpaid – with whoever I want. Nobody forces me, and if I don’t want to, that means no,” quoted in French weekly magazine Paris Match.

“For me, Zahia is part of a long line of French courtesans, from La Païva, through to the beautiful [Caroline] Otero, Emilienne d’Alençon, and up to the divine Liane de Pougy. This is a purely French tradition, that the whole world has admired and copied,” Karl Lagerfeld told French daily Libération.

What one moment sums her up?

In 2012 she played a sort of sexy Frankenstein’s monster in ‘Bionic’, a NSFW 3-minute sci-fi snuff movie by Hollywood photographer Greg Williams. In it, she frees herself of her laboratory moorings and escapes on to the streets of London. “The story of a sex doll who exercises her own free will,” says the tagline. Indeed. Just like Zahia’s own story, we don’t know how this one ends.

Bionic from Greg Williams on Vimeo.