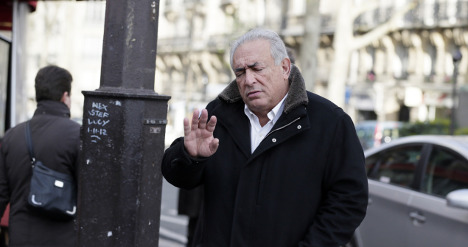 The one-time favourite to be French President was confronted with the escort girl as part of prosecutors' attempts to assess their different versions of events that have led to him being charged with "aggravated pimping as part of an organised gang," judicial sources said.

"All I can tell you is that a confrontation took place in a respectful atmosphere and we are not at all unhappy," one of the Socialist politician's lawyers, Henri Leclerc, said after the four-hour hearing.

The legal team failed in a December bid to have the pimping charges dismissed in the only outstanding case against their client.

Strauss-Kahn last month agreed a financial settlement with a New York hotel maid whose 2011 allegation of sexual assault forced him to resign from his IMF job and wrecked his chances of becoming president.

Strauss-Kahn admitted a sexual encounter took place but insisted it was consensual. A criminal investigation into the incident collapsed after the maid changed her version of events.

French prosecutors however are convinced they have a case against Strauss-Kahn in what as known as the "Carlton affair".

It centres around allegations that business leaders and police officials in Lille operated a vice ring supplying girls for sex parties, some of which are said to have taken place at the city's Carlton Hotel.

The case took a colourful twist this week when Dominique Alderweireld, a convicted pimp widely known as "Dodo la Saumure (Dodo the brine)" became the 10th person to be charged with aggravated pimping. His nickname is a reference to the curing liquid used for mackerel, which is French slang for pimp.