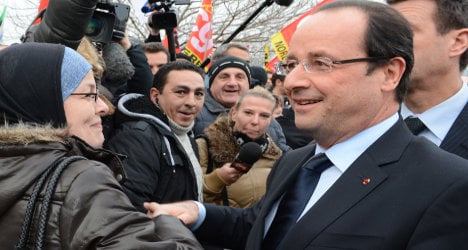 Hollande greets the public on a trip to Grenoble. Opinion polls suggest Mali has not changed the views towards him ofthe French people. Philippe Desmazes/ pool / AFP

French warplanes destroyed two Islamist bases in northern Mali as a leading Al Qaeda-linked group in the region split on Thursday, with the breakaway group saying it wanted talks to end a Paris-led offensive against the militants.

The reports would have been greeted positively by President François Hollande.

Opinion polls taken in the days after France began military operations in Mali on January 11 suggested the president’s image in the eyes of the electors had been strengthened.

His previous reputation as Mr Flanby – the man who could never take a decision – appeared consigned the past as Hollande fitted into the role a President leading his country in a time of war.

But it appears the boost was shirt lived with a poll for France’s BFMTV on Thursday suggesting the president’s image in the eyes of 60 percent of French people had not changed. Only 19 percent of respondents said they viewed him more positively and 10 percent even said he had gone down in their estimation since the conflict began.

According to Philippe Marliere, professor of French and European politics at University College London, Hollande’s honeymoon period on Mali is well and truly over and things may get worse.

“Hollande had a reputation of being indecisive and not making decisions quickly enough or being able to maintain a course of action so Mali took everyone by surprise. He did not consult even with parliament. But the bounce in opinion did not last long," he told The Local.

“If as expected the troops will stay in Mali in the long run, or at least for a few months, then things will change. When there starts to be casualties among the French soldiers then support for Hollande will dwindle."

Hollande will also be concerned that dissenting voices have started to be make themselves heard in recent days especially among France’s political class, which only weeks ago had presented a united front as French troops began their offensive.

“There was unanimity at the beginning among French politicians. The right was on side but now you can hear complaints from the Greens and from the left," Marliere added.

One of the first to question the French intervention was the outspoken leader of the conservative UMP party Jean-Francois Copé.

Copé criticised the fact France had been left alone to fight the Islamist rebels and also questioned Hollande’s objectives.

“The president of the Republic needs to make it clear on what criteria it will consider whether or not the objectives have been achieved. Is this a struggle against international terrorism? Is it against regional terrorism? Or is this about the unification of Mali?” Copé said.

Former UMP minister Valerie Pécresse also made a thinly veiled criticism of Hollande and his standing on the international stage.

“What bothers me about this intervention is the isolation of France. If it Nicolas Sarkozy had been President we would have gone to war supported by either Germany, Britain or the US,” she said.

Other opinion polls are however, still showing strong support among the French public for the military intervention.

But whatever happens in the opinion polls however Hollande and the Socialist government cannot waiver in the battle against Mali’s rebels.  The war is as important to Hollande’s stature as it is to France’s own standing, UCL’s Marliere told The Local.

“Maintaining an influence in Africa has always been an issue for France. France would not react like this in the rest of the world. They want to be seen in Africa as a force who can be called upon. This is France’s domaine,” he said.

“Hollande does not want to be seen as the guy who let down an African country that is friendly to France.”