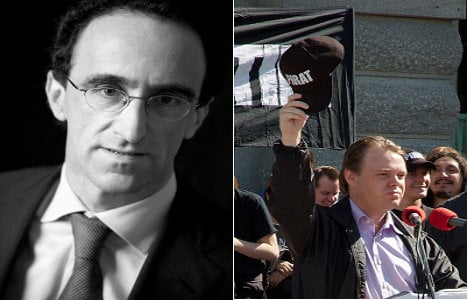 On Thursday a French court ruled that Twitter must release details of anyone found to be posting racist or anti-Semitic messages on its social networking site.

The ruling follows a legal complaint lodged in October by France's Union of Jewish Students (UEJF) which argued that numerous tweets had breached French law, which prohibits incitement to racial hatred.

The decision marked a victory for several anti-racism campaign groups but some internet rights activists say it was a dark day for freedom of speech.

So, was the court right to force Twitter to hand over information on racist tweeters?

Saying this is against freedom of speech is completely stupid. It is like saying that banning someone from being able to drive at 250kph through a town centre is against their freedom to drive. If we only allow crazy people to drive cars no one will be driving in the future. There always has to be a limit.

People tweet abuse that is just not acceptable. We just want Twitter to give us the details of these people so we can take them to court.

The courts might not agree with us but at least we can try. People simply need to take responsibility. People can’t just say on Twitter they are going to kill Barack Obama or François Hollande. Imagine the reaction if they did that.

Having freedom of speech does not mean you have a right to say what you want and a right to hide behind your anonymity.  People on Twitter do not need to be anonymous. They should not have special treatment. It should be the same as if they said it on the street.

This is an extremely important decision in the wider context of the fight against racism and anti-Semitism. Twitter themselves recognized the tweets were anti-Semitic because they took them down. Our work spans many countries and we know these kind tweets have consequences in the real world, often leading to violence or encouraging people to have views they otherwise may not have had.

"There has been a recent trend in France and other European countries towards punishing speech that is hateful towards minorities.

This is perfectly understandable, but if anyone seriously thinks that France or any other society can root out ‘bad’ opinions just by banning them, they haven’t learned from history.

Time and time again, we’ve seen that the only antidote to intolerant views, is allowing more views to be heard, not less, so that everyone can decide for themselves who’s wrong and who’s right.

The only thing that can defeat the trolls is sunlight.

Of course, a line must be drawn when it comes to advocating violence against a group of people, but ultimately, freedom of expression must include the freedom of stupid people to be wrong.

Moreover, it’s worrying to hear the French court determine that unpopular opinions don’t deserve the same level of protection as popular ones, and doubly worrying that the court has asked Twitter to give up the anonymity of the users expressing those opinions.

Anonymity is an essential layer of protection for those in society who have unpopular views and want to share them.

Look at the founding of the United States. The Federalist Papers were written under the name ‘Publius’, because they called for high treason against Britain, which was punishable by death. If the Founders had been forced to reveal their identities, we wouldn’t have the United States of America.

When we send letters, we can put our names on the front of the envelope, in the letter, or not at all. If we respect the right to send letters anonymously, why shouldn’t the same principle apply to Twitter?

France, just like every society, must be sure to protect the rights that our forefathers fought and died for, and extend them to our children."

Rick Falkvinge is a Swedish IT entrepreneur and digital rights activist who founded the world's first Pirate Party. In 2011, Foreign Policy magazine named him of its Top 100 Global Thinkers.

If you have views that you want to share with us, do it @TheLocalFrance