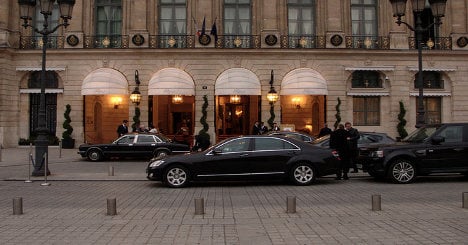 The Ritz in Paris, where in workmen discovered a painting that could be worth €500,000. Photo: Nicolas Vigier

Now, the giant tableau is to be sold by Christie's auctioneers and could raise up to 500,000 euros ($665,000) for the foundation established by owner Mohamed Al Fayed in memory of his son Dodi, the late boyfriend of Princess Diana.

The oil painting has been identified by experts as an early work by Le Brun (1619-1690) that would have been completed before he became the official painter at the court of Louis XIV and established his reputation as one of the dominant figures of 17th century French art.

It adorned one of the suites in which Coco Chanel lived for more than 30 years but when exactly it was installed in the hotel remains a mystery.

The building that houses the hotel on the swanky Place Vendome dates from 1705 and was initially a family home for French nobles. It became the Ritz after it was bought by Swiss hotelier Cesar Ritz in 1898.

The hotel archives offer no clue as to how the painting ended up there, according to Christie's art advisor Joseph Friedman.

"When I saw this painting in the suite, I had to take a step back. It had a very powerful impact," Friedman told AFP. "The use of colour and the movement are remarkable. The influence of (Baroque master Nicolas) Poussin is obvious.

"A colleague then found the initials CLBF, which stand for Charles Le Brun Fecit (Le Brun did this) and a date, 1647."

Christie's then embarked on a process of consultation with relevant experts and although they have not found any contemporary record of the painting, "noone is in any doubt that it is a genuine Le Brun," according to Friedman.

The man who first spotted the painting was Olivier Lefeuvre, a Christie's France specialist in the period, who came across it in July, a month before the Ritz closed its doors for a two-year renovation.

"I thought it was a Le Brun straight away," he said. "It was very well preserved. It was really quite moving."

The painting depicts the killing of Trojan princess Polyxena after she was implicated in the death of Achilles. In the absence of any historical records, Christie's have named the painting as "The Sacrifice of Polyxena."

According to Lefeuvre, Le Brun most likely painted the scene after a three-year stay in Rome where he studied the work of Raphael and became close to Poussin.

The painting is to go on display in New York next week and will be auctioned in Paris in April.

"Mohamed Al Fayed decided to sell it because he thinks its quality means it should be in a museum," Friedman said. "It deserves to be part of a major collection."

The hotel of choice of Charlie Chaplin and Ernest Hemingway, the Ritz is also infamous as the place where Dodi and Diana dined before their fatal car crash in 1997.