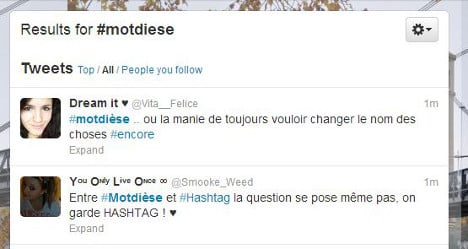 No more hashtag in France. Tweeters respond to the news on the er... hashtag #motdiese.

News of the demise of the word hashtag in France was revealed on Wednesday on the government website Journal Officiel .

The move comes after the Commission Générale de Terminologie et de Néologie, France’s language police, officially validated the choice of “mot-dièse” as a replacement for the now ubiquitous english version.

One of the commission’s roles is ‘to encourage the presence of the French language on social media networks’.

Defined as a “series of characters preceded by the # symbol”, the word ‘mot-dièse’, literally meaning ‘sharp word’, will now be used in all official documents.

Needless to say the news of the end of hashtag caused a bit of a stir as well as a certain amount of ridicule on Twitter.

Berengere Promerat  tweeted: “Ahah French commission says French should not use #hashtag anymore but #motdièse!!! What a joke!!!”

Certain tweeters wondered what the commission would set its sights on next.

“’Hashtag’ becomes 'mot-diese' Facebook will become trombinoscope or Fessebouc,” tweeted Jean-Michel Boudon and on a similar note Golden Moustache tweeted: “We will not say Facebook anymore but ‘Livre des facies’”.

There also appeared to be a certain amount of resistance among French tweeters.

“I don’t know about you but I will continue to say hashtag and not motdièse,” said Emmenuelle Vallee.