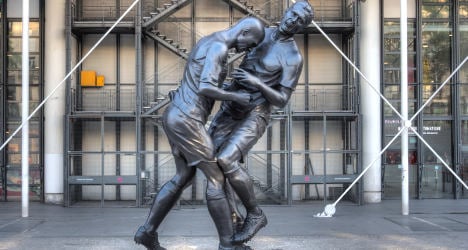 'Headbutt', a bronze sculpture by Abdel Abdessemed, outside the Pompidou centre in Paris. Photo: Channone Arif

It was the headbutt that was felt around the world.

No-one has been able to establish just what Italian defender Marco Materazzi said to the man known simply as Zizou, but the sight of the French player charging at his opponent head-first, minutes away from a penalty shoot-out in the 2006 World Cup final, is one of the most iconic sporting images of all time.

Now the whole affair has reared its ugly head again – so to speak – with Materazzi telling France Football magazine on Tuesday that the Frenchman "has still not apologized" and the chances of reconciliation are now slim.

The 39-year old joked that, "even Kofi Annan and Nelson Mandela got involved to try to make peace between the two of us, " adding that "the UN called me, wanting to organize a campaign."

The former Inter Milan centre back said that being photographed in public with Zidane wouldn't be an issue for him. "I have nothing to hide, and I wouldn't have any problem looking him in the eye," he added.

It was unclear whether a chance encounter in Spain before a Real Madrid-AC Milan Champions League game in 2010 had served to thaw their relations or deepen the rift.

"When I held out my hand to him [in the car park of the Bernabéu stadium] I certainly knew it was him," Materazzi said.

"But when he said later that he thought I was just a fan, he missed a chance to show some class,” the Italian lamented.

“The whole world would have said, ‘Look – Zidane is such a noble guy because he shook hands with this piece of shit,’” the World Cup winner concluded.

Despite some obvious bitterness about Zizou’s place in the pantheon of football greats, Materazzi also seems to have a sense of humour about the whole controversy.

While in Paris last November, the Italian came across the bronze statue, ‘Headbutt’ outside the famous Pompidou centre, an artwork depicting that special moment in football history.

He didn’t miss the chance to have some fun, tweeting a photo of himself in front of the statue to his many followers.