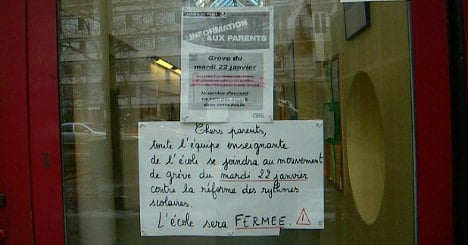 A notice on the door of a primary school in the 19th arrondisement of Paris tells parents that all staff are on strike. Photo: The Local

Education minister Vincent Peillon has angered the teaching profession in France by proposing to extend the school timetable by half a day each week from September 2013.

Teachers are concerned the extra half day will simply add to their already overburdened workload without the necessary financial compensation.

There are also doubts enough staff can be recruited to cover the extra hours in the timetable and it will be all be financed.

Unions estimate the strike in the French capital will gain “historic” levels of support among staff. They claim up to 95 percent of teachers will join the walk out.

The striking teachers have also planned a protest march for 2pm on Tuesday starting at metro Temple before heading to the Hotel de Ville.

Out of a total of 624 schools in the capital only 66 remained open but were operating a ‘minimum’ timetable.

“The teachers who helped bring this government to power by mobilizing their vote are disappointed,” Jérôme Lambert, head of the Paris branch of the union SNUipp-FSU, told France’s TF1 television.

Valerie Marty, president of the Federation of Parents added: “Both teachers and parents are unhappy at how this reform is being carried out.”

Currently in France primary schools are closed on Wednesdays but the socialist government wants children to start attending classes on Wednesday morning in the future for 'extra-curricular activities'. In return the length of the full teaching day will be slightly shortened.

“We need to inform the French people that one week of 4.5 days is better for learning than 4 days of more than five hours of classes,” the education minister said. “It will allow children to undertake more sporting and cultural activities.

“We cannot continue to be the only country in the world where our students attend school only 144 days a year,” Peillon added in French daily Le Parisien.

In contrast to France, children in Germany attend school 193 days each year – the most out of all the member states of the OECD (The Organisation for Economic Co-operation and Development). The average number of school days for nations in the OECD stands at 187.

Details of the extension to the school week are due to be finalized this week before being made public on Friday.