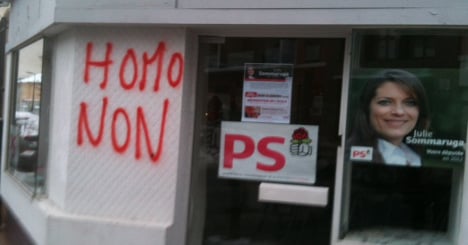 The Socialist party branch at Malakoff near Paris where homophobic graffiti was daubed on the wall outside. Photo: Parti Socialiste

The attacks, which come just days before France's parliament is set to discuss a government bill to legalize gay marriage, began on Sunday night when bricks were thrown at the windows of the ruling party’s branch in Issy-les-Moulineaux near Paris.

Homophobic graffiti was scrawled on the walls and anti-gay stickers were also placed around the offices.

On Tuesday two other nearby party offices at Malakoff and Sèvres were also hit by vandals, who again made their opposition to gay marriage quite clear.

At Malakoff the words ‘Homo non’ and ‘Adoption homo non’ were written in red paint on the outside walls.

The local PS councillor Thibault Delahaye condemned the actions of those responsible.

“These were hateful and homophobic acts and it shows that even in 2013 the fight against discrimination is a daily battle,” Delahaye told The Local.

“Everyone has the right to oppose gay marriage and there is an on-going debate but these acts are illegal.”

There have also been two similar incidents at Socialist Party offices in the Val-de-Marne region outside Paris, bringing the total number of attacks to five. In several cases stickers with the words “youth nationalists” were left stuck to walls. Police are investigating the incidents.

In a statement the local Socialist Party MP Julie Sommaruga denounced those behind the attacks.

“Whatever people’s opinions are on gay marriage it is unacceptable to use such intimidating methods,” she said.

The vandalism comes after one Socialist party MP, who is involved in drawing up the bill to legalize gay marriage, was sent excrement through the post.

On Friday President François Hollande is set to hold discussions with the chief anti-gay marriage campaigners at the Elysée Palace.

Two days later activists in favour of same-sex marriage are set to take to the streets of Paris to show their approval of the government’s plans before parliament is due to begin discussing the bill on January 29th.