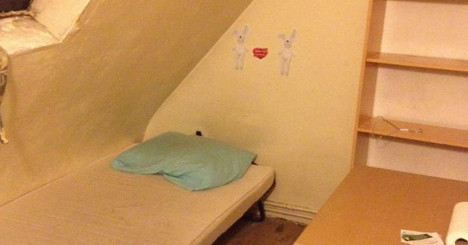 Last week The Local reported the ‘scandalous’ case of a tenant, who lived for 15 years in a 1.56 square metre flat in Paris at a cost of €300 a month. The housing horror story this week is the case of a single mother and her baby kicked out on the streets in the middle of one of the worst cold snaps to hit the country in recent years.

In the latest incident to highlight the shocking living conditions of some residents in the capital the charity Fondation Abbé Pierre reported the mother was booted out of her flat in the capital’s 14th arrondisement for failing to pay the €200 rent.

Her landlord took the step of piling all her belongings in the corridor before changing the locks on the door.

“We were shocked to find a 4-square-metre apartment which should have been closed under law,” Fondation Abbé Pierre’s Patrick Doutreligne told Europe1 radio. “This is a place where you put boxes and suitcases, not a person and certainly not a woman with a child.”

The landlord could find herself in hot water with authorities because French law prohibits evicting tenants during winter months. The landlord also faces the risk of prosecution due to the fact it is illegal to rent out flats smaller than 9-square-metres.

According to French daily Le Parisien the mother’s living conditions were highlighted to authorities in June last year but no action was taken to close the flat.

“Police took seven months to react to this,” Doutreligne told the paper. “The landlord now has an obligation to rehouse this tenant in suitable accommodation.”

In an interview with French radio RTL later on Monday French government spokeswoman Najat Vallaud-Belkacem described the mother's case as "intolerable" and said the landlord will be pursued through the courts.

"The housing crisis is encouraging abusive behaviour that we need to fight against," she said.

Fondation Abbé Pierre estimates that 20 percent of the cases it deals with involve people living in apartments smaller than the legal limit.

Last week the charity told The Local how landlords in the capital continue to take advantage of the housing shortage by renting out sub-standard accommodation to vulnerable tenants.

“Some landlords are unscrupulous. The law is there but it needs to be enforced,” Samuel Mouchard said.

“Tenants need to know that it’s forbidden. If they have doubts they can go to their local Town Hall where measures can be taken to protect them or to rehouse them.”