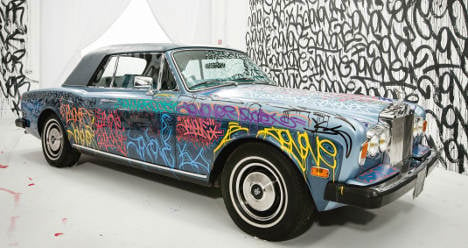 Most vintage car-owners would be horrified at the mere sight of a can of spray paint in the vicinity of their pride and joy but last November, the 46-year-old Manchester United legend Eric Cantona did the unthinkable by inviting world-famous New York street-artist 'JonOne' to cover his 1984 Rolls-Royce Corniche in graffiti.

With the luxury model thoroughly tagged by the Paris-based artist, whose real name is John Perello, Cantona handed the vehicle over to the 'Fondation Abbe Pierre,' a French housing charity which counts the retired footballer among its celebrity patrons.

The reborn work of modern art has been on display at the Artcurial auction house and gallery near the Champs Elysée since Sunday, and will be sold to the highest bidder on Tuesday, with a starting price of 20,000 euros.

"We're expecting a great crowd at the auction tomorrow," Armelle Maquin, a spokeswoman for Artcurial told The Local on Monday.

"The interest surrounding the car is due to who it came from, the fact that JonOne has made it into a work of art, but also, of course, because of interest in the homeless," she concluded.

In an interview with French weekly Voici, Cantona said: "It's the ultimate symbol of wealth, and now it's associated with a symbol of poverty, by a true street artist."

Read The Local on Tuesday to find out how much his prized Rolls Royce raised for charity.