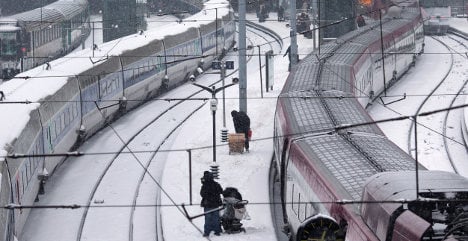 Gare du Nord station in Paris, one of the main transport hubs of the city, lies under a blanket of snow. Photo: AFP/Joel Saget

With up to 20 centimetres  of snow falling in the most-affected areas over the weekend, more than a quarter of France's regions were on alert and the weather service warned that more snowfall was expected overnight.

With people returning to work after the weekend, Monday was expected to be a difficult day for the public transport system in Paris. People have been advised to walk to work if they can and elderly residents have been advised against going out on to the streets where ice and snow has made walking hazardous.

On Sunday snow covered the largely empty streets of the French capital, where drivers were hesitant to take to the icy roads and all bus services were cancelled.

But a few braved the weather including a man in a red-and-blue snowsuit seen cross-country skiing on the streets of Montmartre and young girls sledding beneath the hill-top Sacre Coeur Basilica.

The city's famed Metro was largely unaffected, but about 100 passengers had to be evacuated when a subway train was blocked on an exposed bridge that passes over the River Seine.

Firefighters spent an hour assisting the passengers, with boats deployed on the river in case anyone fell in.

City transport operator RATP said the Metro is expected to run as normal on Monday, but that only about 50 percent of the buses will be taken into traffic.

The capital's airports struggled to deal with the thick covering of snow, with 40 percent of flights cancelled at Charles de Gaulle and Orly.

Flagship carrier Air France said it had managed to go ahead with almost all of its long-haul flights and just over half of its short- and medium-haul journeys, with average delays of about one hour. For Monday, it said its long-haul flights are expected to operate normally at Paris airports, but only about 50 percent of the shorter flights.

Airport officials said they had asked airlines to maintain a 40 percent reduction in flights on Monday because more snowfall was expected.

Some airports, including in Lille in northern France and that in Beauvais, outside of Paris, were forced to close Sunday.

The closures resulted in budget carrier Ryanair having to divert several of its flights to other airports.

More than 120 Ryanair passengers, heading from Oporto in Portugal to Lille, were left stranded in the western city of Nantes. Airport officials said they would be brought to their final destination by bus on Monday. The snow also caused delays and cancellations on France's TGV high-speed rail network, with rail officials urging travellers to if possible put off journeys planned for Sunday.

The Paris-Limoges-Toulouse line was shut down because the cold affected the rails and another line, in the Pyrenees, was closed due to the risk of avalanches.

Although no major disruptions are expected to hit the railway network on Monday, the trains will run slower than usual to be able to handle the frigid weather.

Road conditions were treacherous and a Polish truck driver was killed Sunday after he lost control and crashed his Spanish-registered lorry on a highway near the western town of Liguge.

Six people were killed on the slippery French roads earlier during the weekend, including three French soldiers about to join comrades fighting in Mali.

The weather caused power cuts in several regions, including in the southern Midi-Pyrenees region where 25,000 homes were without electricity.