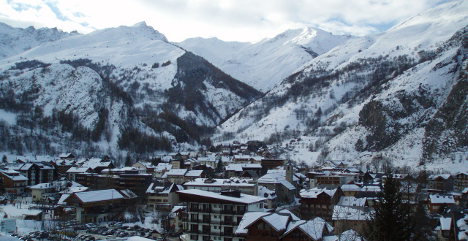 Mountains surrounding the village of Valloire in the department of Savoie (Savoy), where a 32-year old man died in an avalanche on Sunday. Photo: Anthospace/Wikimedia Commons

The man, reportedly from northern France, had been skiing off-piste on Sunday at Valloire in the department of Savoie (Savoy) when an avalanche engulfed him, France's RTL radio reported.

Emergency services managed to locate the man, but the back-country skier had suffered a suspected cardiac arrest and they were unable to resuscitate him.

The national meteorological service, Meteo France had announced a 3/5 avalanche risk on Sunday for Savoie, which is close to the French-Italian border.

Meanwhile, three off-piste skiers survived a separate avalanche in the Isère department the same day.  The group, all aged in their thirties, were carried off on a sheet of snow measuring 100m long and 10m wide, which had detached itself from the slope at Auris-en-Oisans, 65km from the city of Grenoble.

Other skiers and emergency services found the three submerged in snow. One of the party was found to be suffering from hypothermia and trauma to the legs after reportedly remaining buried for ten minutes.

These incidents came after Meteo France last week placed parts of the Pyrenees region on 'red alert' for avalanches, for the first time ever.

Widespread snow and severe weather conditions caused traffic bedlam throughout France over the weekend, with some airports, including Charles-de-Gaulle in Paris, forced to cancel numerous flights.