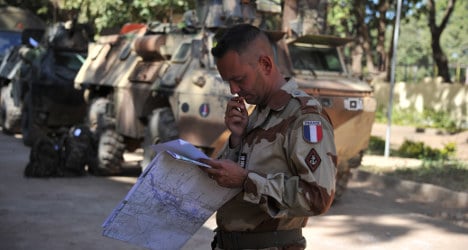 After heavy fighting in Diabaly over the past week there was uncertainty over whether the Islamists had fled, but French and Malian troops met no resistance when they earlier Monday entered the town.

French Defence Minister Jean-Yves Le Drian said in a statement that it was now under the control of French and Malian troops and that the central town of Douentza had also been retaken.

French warplanes have pounded suspected Islamist positions around both towns since France swept to the aid of the crippled Malian army on January 11, a day after the Islamists made a push towards the capital Bamako.

Diabaly, which lies 400 kilometres (250 miles) north of Bamako, was seized by the Islamists a week ago in an attack that surprised observers as the town lies deep within supposedly government-held territory.

Douentza lies in what was Islamist territory east and north of the town of Konna, whose capture earlier this month by extremists sparked the French intervention. Konna was recaptured by the Malian army last week.