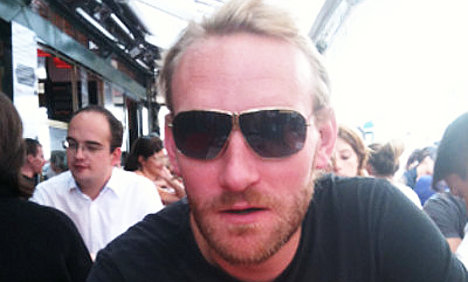 For the first instalment of The Local’s My French Career series we met Gavin Doughty, 34, from Nottingham in the UK. Gavin is a one-time English teacher, part time football player for English pub The Bombardier, who is currently plying his trade with HSBC bank just outside Paris. He has been in France on and off for about ten years and knows a thing or two about working here.

So how did you end up living in France?

Well, I learnt French at University but because I was living in Nottingham I wasn’t using my language. It was frustrating and I thought it was a bit of a waste to have language skills but not use them, so I moved over here. France is close to the UK so it’s easy to pop back home and see the family. Plus France is one the countries that I have always wanted to live in.

How did you land your first job?

I did a Tefl course in London and taught at Nottingham University for two summers. I put my CV on-line and was offered a job in Nancy as an English teacher. I worked there for a year before coming to Paris where I continued teaching for a company called BTL for another year.

Is English teaching as bad as some people say?

No it’s a great job to start out with if you come to France. It gives you time to get used to living in France and its pretty flexible so you can do as much or as little as you want. You meet a lot of people and can make some good contacts and then get the spin offs after that.

So you’ve moved on since then?

Yes, I've had a variety of jobs since including recruitment and working for a fine art transport company and I am currently working for HSBC at their Premier International Direct centre in Paris, looking after international clients both resident in France and abroad. I’ve been with the bank for just under three years. I started out working on the front desk in a high street branch near Opera and have been promoted 3 times since. The fact that I'm English has enabled me to move up quite quickly.

How is it working in France compared to the UK?

Well it was fairly difficult at first. There were some cultural differences to get accustomed to. I found a lot of French staff have this idea that because they are providing a service to customers it is them who are the most important, whereas the Anglo attitude is that it is the clients that are the most important. This can cause a few issues and I have had numerous disagreements both professionally and personally due to this. It was difficult to decide whether I should adapt to their ways because I am in France or they should change because they are working for a foreign bank, but at the end of the day this is France and you have to adapt, even if begrudgingly.

Anything else on working culture you can shed some light on?

You have to respect the working hierarchy here much more than in the UK. If there is someone above you at work then you have to show them respect at work as well as outside work. There are also a lot of old boys’ networks here. Often how well you do depends on what school or university you went to or who your parents know.

Tell me something positive about working here?

Well the holidays are fantastic and the jobs are relatively stress free compared to the UK, Paris seems to be stressful but the working culture is anything but. And if you are an English speaker you will find a lot of opportunities open up for you and you can move up quite quickly because of the fact you have English as your mother tongue. Also a lot of ambitious young French people move abroad to do the same thing so it feels like there is a real talent vacuum here. I know people who have come over here, worked their way up then returned home to work.

What about the problem of learning French?

Well a lot of companies don’t actually require it so it’s not always the barrier people might think it is. But yeah the best way to learn it is to speak French to people. I really made an effort to speak to locals when I first got here. One of the best things to do is go to the English or Irish pubs. There are always a lot of French people in there who are looking to meet foreigners to practice their English. It can work both ways.

What advice do you have for anyone hoping to come to France to work?

Do it and stick at it. Don’t throw the towel in when it gets difficult. There is a lot to put with here like the bureaucracy but you just have to accept it. Sometimes you feel like you have to fill in a form to be able to catch a bus but it all pays off in the end. Plus you will get enough time off to be able to do all the paperwork.

Anything else? Yes, socialise. Get out and meet people, join sports clubs, network. I got my current job through an English friend, who recommended me, so meeting people can be very important.