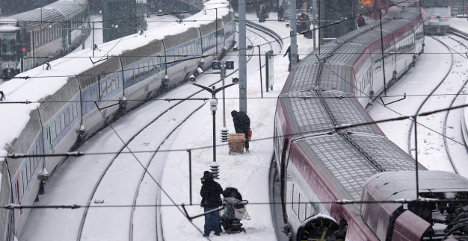 Gare du Nord station in Paris, one of the main transport hubs of the city, lies under a blanket of snow. Photo: AFP/Joel Saget

As well as the cancellation of six trains, speed restrictions were put in place on the cross-channel line meaning passengers face delays in travelling between the UK and France.

Passengers affected by the cancellations will be allowed to change their tickets for later trains.

French weather service Météo France placed 14 regions on orange alert on Monday due to the risks caused by further snow and ice.

Civil aviation authorities in France have asked airlines operating out of the two Paris airports Charles de Gaulle and Orly to cut their flight schedules by 40 percent.

Passengers have been asked to check whether the status of their flights before making the journey to the airport.

In Paris, despite a slight thaw in temperatures, only half of the normal public bus services were running on Monday.

The disruption to travel comes a day after heavy snow caused much of the country to grind to a halt.