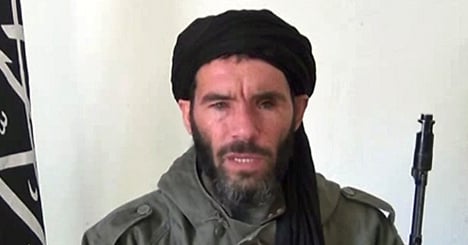 An undated grab from a video reportedly shows former Al-Qaeda in the Islamic Maghreb (AQIM) emir Mokhtar Belmokhtar, who has claimed responsibility for the mass kidnapping in Algeria. Photo AFP/HO/ANI

Although France’s Interior Minister Manual Valls has not confirmed any of his countrymen were among the kidnappers, sources in the country’s intelligence services have indicated to media in France that there were French jihadists involved.

The four day hostage siege, which left 81 dead including at least 48 hostages, was finally brought to an end on Sunday after an operation by Algerian armed forces.

The jihadist group run by Mokhtar Belmokhtar, a former leader of the regional Al-Qaeda franchise, attacked the In Amenas gas plant as revenge for France’s decision to intervene against Islamist rebels in Mali.

There have been unconfirmed rumours in France for several days that the jihadist group contained French nationals.

And after apparently being handed information from their Algerian counterparts, sources among France’s intelligence services and anti-terrorism units confirmed those reports to French daily Le Parisien on Monday.

“The name that they have given us did not appear on any of our files or in any database,” a source in France’s anti-terrorism unit (DCRI) was quoted as saying in the paper.

“He must have been in Algeria for a long time, otherwise he would have been picked up,” a well-placed judicial source added.

Algerian television station Ennahar TV has already claimed that two of the hostage-takers killed in the raid by the Algerian military were Canadian nationals.

Publicly at least, France’s government remained cautious over the reports its own citizens may have been involved.

Asked to confirm the presence of French nationals among the kidnappers Interior Minister Manuel Valls said: “I don’t believe it is the case”, adding that the reports were just “rumours”.

Valls did however accept “without doubt” there were French nationals enlisted in various jihadist groups in the Sahel region of North Africa.

The minister said he expected to know more about the hostage-takers after speaking to the Algerian Prime Minister Abdelmalek Sellal this afternoon.

Sounding a note of caution, Valls said the terrorist threat facing France was ‘greater than ever before’.

France is currently on heightened alert against a terror attack in the light of threats by Islamist extremists to "attack at the heart of France" in revenge for its Mali operation. Security has been raised throughout the country, most notably at airports and train stations.

“Since March last year (when self-proclaimed Islamist extremist Mohamed Merah went on the rampage in Toulouse) and after a terrorist cell was dismantled in October, the threat is still very high”, the Interior Minister told Europe1.

“We have an enemy outside our borders but at the same time there is an internal foe that is made up of dozens of dangerous individuals that need to be watched closely and neutralized.”