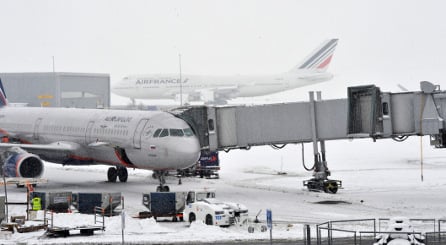 Charles de Gaulle Airport in Paris on Sunday, where many flights were grounded over the weekend. Mehdi Fedouach / AFP

The company said all of its long-haul flights would go ahead at Paris's Charles de Gaulle and Orly airports, but airport officials warned that further disruptions were possible as snow continued to fall.

Aeroports de Paris, which operates the city's main airports, said air traffic there would be disrupted "all day Sunday".

The snow blanketed large parts of northern and southwestern France from Friday to Sunday, with snowfall reaching 15-20 centimetres (6-8 inches) in some areas.

It also caused delays on France's TGV high-speed rail network and forced the cancellation of bus services throughout Paris.

On Saturday the icy temperatures also caused delays and cancellations on major railway lines including the Eurostar train service, and transport authorities warned of further traffic disruptions with more blizzards.

The snow and ice led to treacherous road conditions and several fatal car crashes over the weekend. Six people were killed on the slippery French roads, including three French soldiers about to join comrades fighting in Mali.

The troops were travelling in an army car with their military packs and weapons when their vehicle crashed in an accident involving two trucks and two cars.

Near the central French city of Tours, a driver died in icy rain on a motorway after his car hit an emergency vehicle attending to a minor accident.

In Savoie, in the Alps, a coach transporting Russians overturned on a motorway access road, injuring 20 people, three of them seriously.

About 100 passengers on a Ryanair flight to Pisa in Italy said they had to spend the night in Beauvais airport, north of Paris, after their flight was cancelled.

The Chateau of Versailles park was closed Saturday due to heavy snowfall and residents of Paris woke to see the city dusted in a thick covering of snow.

According to French weather services, more snow was expected across northern and southwestern France for the rest of the weekend.