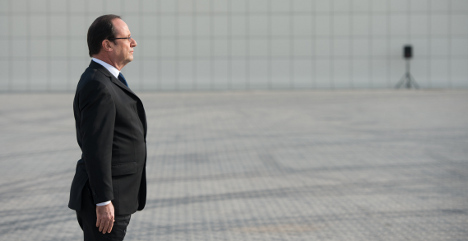 As French warplanes carry out airstrikes and French troops clash with Islamist rebels in the West African country, Hollande and his ministers seem to have taken a page from former US president George W. Bush's playbook on war-time communications.

This has led some critics to accuse the government of carrying out a propaganda war alongside the fighting on the ground.

Their language has been simple, direct, and clearly designed to portray the conflict in black-and-white.

"The use of language is calibrated: the cause is just, a fight against terrorism, us/them, good/bad. These are the fundamentals of war-time communication," said Francois-Bernard Huyghe, a researcher at the Paris-based Institute of International and Strategic Relations.

In a speech during a visit to the United Arab Emirates, Hollande pulled no punches in describing France's mission, saying: "What do we plan to do with the terrorists? Destroy them."

His words seemed to echo not only Bush but also Russian officials who have repeatedly vowed to "liquidate terrorists" in their fight against insurgents in Chechnya and other parts of the volatile North Caucasus region.

"Hollande is being simple and soldierly," Huyghe said, noting that the communications effort has so far been largely successful, with a poll Wednesday showing three-quarters of French supporting the intervention.

"Faster even than the outbreak of the war, France's propaganda war was launched at supersonic speed," noted influential French media critic Daniel Schneidermann.

French media reported that ministers have been banned from using the words "Islamist fighters" in statements on the conflict and must always refer to rebels as "terrorists".

Officials have often gone further, with Le Drian referring to "jihadi terrorists" and Fabius to "terrorists and criminals". "This is approaching Bush's rhetoric and it's bizarre from the mouth of a Socialist", Huyghe said, noting that "excessive use of the word 'terrorist' is aimed at presenting the opponent as evil and inhuman."

He said branding the rebels "terrorists" was a simplification of the situation of Mali, where at least three distinct Islamist groups – Al-Qaeda in the Islamic Maghreb (AQIM), the Movement for Oneness and Jihad in West Africa (MUJAO) and Ansar Dine (Defenders of the Faith) – are fighting.

"Reducing them simply to terrorists is too easy, it erases the complexity of the problem, obscures the reality," Huyghe said. Critics said the branding operation could eventually hurt peace efforts by making it impossible for France to justify negotiations with any of the Islamist groups.

Hollande "is condemning himself to exclusively being able to speak to the current government in Mali, which is the result of a putsch… and is seen as completely illegitimate by the public," news website Mediapart wrote.