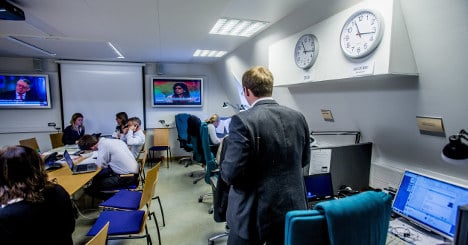 A French government source said "an operation is under way" while Norway's  foreign ministry spokesman Kjetil Elsebutangen said: "We can confirm that we have been informed of a military operation against the In Amenas complex."

Earlier on Thursday President Francois Hollande confirmed the presence of French citizens at a gas field in Algeria where Islamists seized the hostages.

"There were, there are (French citizens) at the site," Hollande told reporters, while expressing "full confidence in Algerian authorities."

Newspaper Sud Ouest had reported that a 52-year-old French man was among the hostages, quoting him as saying they were not being mistreated.

"It's ok, we're being well-treated," the man, from the town of Anglet near the Spanish border, told the newspaper by telephone.

The man, who works at a catering company serving employees at the gas field, said the hostage-takers attacked the site on Wednesday around 5:40 am and "stormed the base after an exchange of gunfire with security agents."

The militants said they seized the hostages, who are known to also include US, British, Irish, Norwegian and Japanese citizens, in retaliation for French military intervention in northern Mali.

Algerian media reported Thursday that 15 foreigners and 30 Algerians being held hostage had managed to escape.