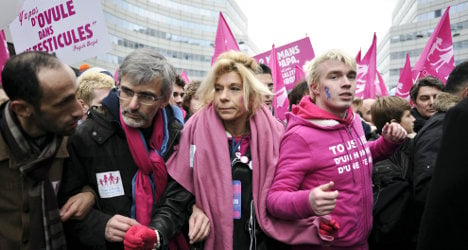 So who’s Frigide Barjot then?  Barjot is the French comic and commentator currently leading a movement against the government’s plans to legalize gay-marriage. She is not to be confused with the one-time French sex-symbol Brigitte Bardot.

So what’s she been up to?  On Sunday she led one of the biggest demonstrations in recent memory when hundreds of thousands of protesters turned out in Paris for ‘La Manif Pour Tous’ (“the demo for all”).

That’s impressive. Yes, even more so because Barjot managed to take a really wide range of anti-gay marriage groups, with all their personalities and agendas and flags, and unite them under one tent.

She got Jewish agnostics and Muslims to march next to Catholic priests, who sang songs with gay, atheist activists. Old women at the protest waved signs saying “I’m a marriage-lover, not a homophobe.” Everyone wore pink and sky blue and performed Gangnam Style under the Eiffel Tower.

I’m confused. I know what you mean. It’s hard to be sure Barjot is not just an elaborate practical joker. Everything about her is ironic. Her name translates as “Frigid Loony”, and is a play on the 60s sex symbol, Brigitte Bardot,. She’s a constant fixture in the gay clubs of Paris, and hops from dance-floor to dance-floor, singing, joking and generally charming the marriage rights off everyone. She’s also a conservative Catholic who defends Pope Benedict on French TV, which is not always an easy thing to do.

Can you paint me a picture of this woman? Barjot is a tall, skinny 50-year-old with crazy blonde hair.  At the protest on Sunday, she wore tight jeans and a pink hoodie and had old men and teenage girls screaming her name and tripping over each other in the mud to see her arriving at the Eiffel Tower. Barjot goes everywhere at high speed, but never misses a chance to get in front of a camera or a microphone.

Has she always been this interesting? No! She was born in 1962 by the slightly more demure name of Virginie Merle in the Boulogne-Billancourt neighbourhood, just beyond the western limits of Paris, to middle-class, professional parents. Having studied law at the Ecole Sciences Po (the career start of choice for any self-respecting, ambitious French politico), Barjot got a PR job with the right-wing Gaullist RPR party.

So she was heading into mainstream politics, what happened next? In the early 80s, Virginie met a man named Basile de Koch, a writer and humourist whose real name is Guy Tellene. The two of them became an item while running the Jalons collective of political satirists and performance artists in Paris. Before they married in the late 80s, Monsieur de Koch re-Christened Virginie with her current title.

What one moment sums her up? She appeared on TV in 2009 to attack the use of contraceptives and call for a French “return to Christian philosophy” while holding a bible and wearing a short, leopard-print skirt and tiny white t-shirt emblazoned with a kitschy photo of the last two popes, and the message “Benedict, I trust you!”

So Barjot loves gays, but won’t let them marry each other.  Yes, more than anything, Barjot loves family and children. The birth of her two children Bastien, 14 and Constance, 12, was the trigger for her radical religious conversion.  In 2011 she told the French magazine ‘Christian Family’ that “in order to bring up my children, first I had to raise myself, spiritually.” No matter how much she adores gay bars and gay men, Barjot believes fervently in the classic, nuclear family: “Une maman et un papa.”

What does she have to say for herself? “What’s most important is Christ, my Christ, your Christ, without whom I wouldn’t be alive today, or I’d be living a false life, a dark night full of confusion.”  This is taken from her autobiography 'Confessions of a Trendy Catholic’ by the way, which she launched in 2011 at a bar in Paris’s gay district.

The soiree finished with a gig by her band The Dead Pompidou’s, and a DJ-set from playboy producer and catwalk darling Jean du Sartel. Want another quote?  How about “Make love to me with two fingers”. (see below).