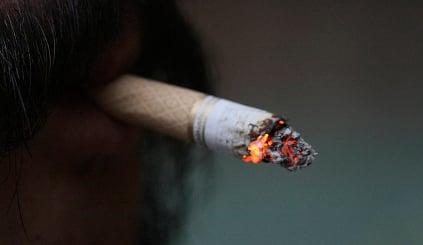 A french court linked passive smoking to the cause of a teacher's lung cancer.Photo: Ed Schipul

In what represents a landmark ruling in France, Bordeaux’s Court of Appeal accepted there was a link between the diagnosis of the teacher’s lung cancer and her exposure to passive smoking while working at the National School of Architecture in Toulouse.

The court said the victim’s cancer, diagnosed in 2000, was a “direct result of the failure of the school to enforce anti-smoking initiatives from 1992 onwards".

The college has been ordered to pay €22, 320 in compensation to the victim.

The court decision was heralded by the anti-smoking association Droits des Non-Fumeurs (non-smokers rights), which believes other lawsuits may soon follow as a result of a precedent being set.

“Up until now the issue of passive smoking had been largely ignored in France,” the DNF's president Gerard Audureau told The Local on Wednesday. “But for the first time a court has confirmed a firm link between passive smoking and cancer.”

“The court’s decision will be a wake-up call for all those people who believe that smoking is not that bad or who think it is not as dangerous as alcohol or drugs,” Audureau added.

Speaking after the court’s decision was made public this week, the victim, who had to have a lung removed in 2003 and is still undergoing treatment, slammed her former employers.

“They tried every means they could to dissuade me [from pursuing the case],” she told France’s Europe1 radio. “But it was a misjudgement because that made me want to beat them even more. It has kept me alive”.

According to French website Le Nouvel Observateur the school will not be appealing the court’s decision.

“The court has ruled. This is an old story and the directors do not wish to comment,” the school’s secretary-general Marie-Joséphe Cougny was quoted as saying in the Nouvel Obs.

According to a 2012 poll carried out by Harris Interactive for DNF, 36 percent of respondents said they had been exposed to passive smoking in the workplace in the last six months, despite a law banning smoking at work coming into force in 2007.