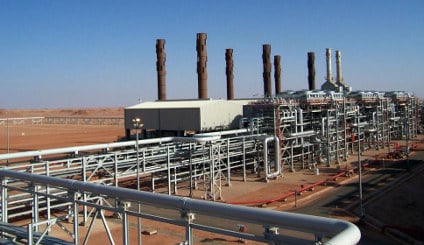 After days of airstrikes on Islamist positions in the northern territory the rebel triad seized in April, French and Malian troops battled the insurgents in the small town of Diabaly, some 400 kilometres (250 miles) north of the capital Bamako.

"The special forces are currently in Diabaly, in close-quarter combat with the Islamists. The Malian army is also in place," a Malian security source said on condition of anonymity. Diabaly was seized on Monday by fighters led by Algerian Abou Zeid, one of the leaders of Al-Qaeda in the Islamic Maghreb (AQIM).

The French military said it had secured a strategic bridge on the Niger river near the town of Markala, south of Diabaly, blocking a key route to Bamako.

French Defence Minister Jean-Yves Le Drian said the western zone where Diabaly lies was home to "the toughest, most fanatical and best-organised groups. It's under way there but it's difficult.

French nationals believed to be among hostages

In a dramatic development in neighbouring Algeria, Islamists claimed to be holding 41 foreigners hostage, including seven Americans, after an attack on a gas field in the country's east, apparently launched from inside Mali.

"Forty-one westerners including seven Americans, French, British and Japanese citizens have been taken hostage," a spokesman for the Islamists told the Mauritanian News Agency as well as Sahara Media.

Algeria state media earlier said two foreigners, including a Briton, had been killed and six wounded, in the dawn raid on a bus carrying engineers near the gas field belonging to British oil giant BP.

"We are members of Al-Qaeda and we came from northern Mali," an Islamic militant told AFP by telephone in claiming responsibility for the attack. He said his group belonged to a fighting unit led by renowned one-eyed jihadist Mokhtar Belmokhtar, a former AQIM leader.

The gas plant is located 1,300 kilometres (810 miles) southeast of Algiers, close to the Libyan border.

An Algerian lawmaker said five staff at the plant — one French national and four Japanese — were taken hostage. The Irish foreign ministry said a man from Northern Ireland was also among the hostages. A Norwegian man was also reported seized.

The attack was the first reprisal by the Islamists for the French air and ground assault that began on January 11. It comes after Algeria threw its support behind the Mali offensive and opened its airspace to French fighter jets.

As offers of non-military support for the assault continued to pour in – with Germany pledging two transport planes and Italy logistical support – Ivory Coast's leader Alassane Ouattara urged all European partners to "mobilise."

The head of the regional bloc ECOWAS was speaking after a meeting with German Chancellor Angela Merkel who warned that terrorism in Mali "is a threat not just for Africa but also for Europe."

Both Paris and Islamist experts warn the jihadists are better armed and trained than expected and the battle is likely to be drawn-out and complex.