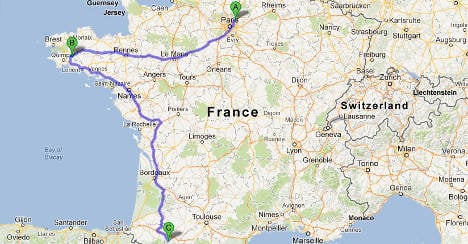 The wayward pilgrimage of the five lost tourists, whose GPS led them to Leuhan in the west of France instead of Lourdes, in the far south. Photo: Google Maps

According to French media reports, the group of women rented a car at Charles de Gaulle airport in Paris after arriving on a flight from Los Angeles on Sunday morning and set off in the direction of Lourdes with the help of a GPS.

A few hours later, believing they had arrived at their destination the tourists, who were described as 'Asian' in the French press' stopped their car to try and get directions to the famous grotto to the Virgin Mary.

But unfortunately for them they had missed their target by 800km and ended up in the village of Leuhan in the western region of Brittany.

The unlucky visitors, none of whom spoke any French, stopped at a bar brandishing a printed reservation for an address in Lourdes, at the foothills of the Pyrenees.

The bar-owner, Manée Peron, realised just how lost they were when he noticed the post code at the end of the address. “They were completely disoriented and totally desperate,” Peron told French TV channel France 3.

The problem is believed to have been caused by the fact Leuhan is home to a church by the name of Notre-Dame-de-Lourdes. It is not certain, however whether human error or GPS fault was the cause of leading the would-be pilgrims down the wrong path.

“I decided not to recommend they visit the [local] chapel of Lourdes,” smiled the patron, adding “frankly, I thought they might not take it too well, so I just showed them a map and pointed out the route to the Pyrenees.”

Lourdes is the site of a shrine to the Virgin Mary which attracts over 6 million Catholic pilgrims each year, most of whom arrive directly by air or train. Any visitors wishing to drive might want to think again.

PARTNER CONTENT
Working from home? Have you considered your ‘tech blind spots’?
Url copied to clipboard!