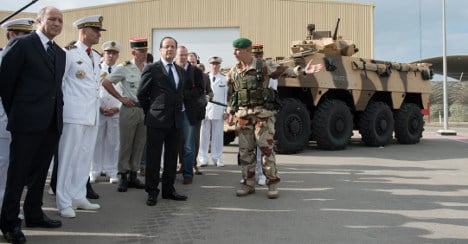 On Friday, France launched a campaign of air bombardments in Mali to halt an Islamist rebel advance on the capital, Bamako. A contingent of 750 French troops has been sent to bolster Malian forces against the rebels, who have controlled northern Mali since April.

"A general message of vigilance has been sent to our embassies," a diplomatic source at the foreign ministry told AFP.

The message also called on embassies to take precautionary measures to try to detect whether there are any hostile reactions toward France and to urge French citizens to avoid crowds, the source added.

According to the consulate general of France in Egypt, the French embassy in Cairo has demanded that Egyptian authorities ensure the security of its interests in the country after calls Friday to demonstrate against the intervention in Mali.

"In response to this intervention, various extremist groups have publicly expressed threats against French interests, especially in Arab countries," the consulate general said in a statement addressing the French community around the world.

Soldiers on the streets of Paris

It comes after Interior Minister Manuel Valls revealed on Tuesday 700 troops had been deployed to the streets of Paris as the country boosts security in light of threats by Mali based Islamists to launch attacks on French soil.

Valls said everything possible was being done to ensure that did not happen, while cautioning that the threat posed by foreign and homegrown extremists had existed long before French forces went into action in the former colony.

"In terms of evaluating the risk, we have to be prudent. But our interior and exterior intelligence services are being extremely vigilant.

"The threat is not new but it is very strong and we have to be fully mobilized to meet it."

France has not yet raised the level of its national anti-terrorist alert system to the "scarlet" level that was briefly applied last year when Islamist gunman Mohamed Merah went on a killing spree in and around the southern city of Toulouse.