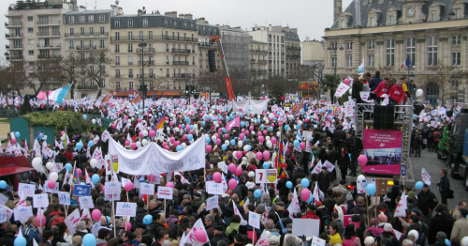 Anti-gay marrriage protesters make their way to the Champs-de-Mars, where they apparently caused some costly damage. Photo: The Local

Bertrand Delanöe is demanding the damages to cover the cost of the restoration of the grass around the Champs-de-Mars, where hundreds of thousands of protesters congregated at the end of the march against gay marriage.

For those who organized the demonstration, Delanoë’s move is a provocation.

“It is absolutely ridiculous,” Xavier Bongibault told The Local. “He would never do that if it was a pro-gay marriage demonstration.”

“He has taken a militant position towards us. He himself gave his agreement that the march could go ahead,” said Bongibault, who is gay himself but against same-sex marriage.

Organisers suggested to France's BFMTV they would not be paying up and Bongibault is proposing, all be it with a hint of sarcasm, that anyone who demonstrated on Sunday could return to the Champs-de-Mars to help replant the grass, as an alternative to paying the hefty bill.

According to radio station France Blue 107.1, Delanoë has sent the invoice to France’s interior ministry because it gave the authorization for the “demo for all” rally, which attracted between 340,000 and 800,000 people.

The Town Hall in Paris says it is up to the police to pass on the bill to the organizers of the march, France Blue reported.

“Who are you trying to kid? @BertrandDelanoe. Would he send over the bill for gay pride?,” Boutin said.

Despite Sunday’s protest, one of the biggest seen in the French capital in decades, the French government has vowed to push on with its plans to legalize gay-marriage and open up adoption to same-sex couples.

Delanoë is expected to join activists in a pro-gay marriage demonstration in Paris on January 27th, two days before the French parliament is set to discuss the proposals.